The election was conducted on 11 June during the 95th session of MSC at the IMO’s headquarters in London. MSC is the IMO’s senior technical body on safety-related matters, and the appointment as Chairman of this committee is a major achievement in the maritime industry.

Mr Groves has been working at AMSA since 1998, and was appointed General Manager of the then Maritime Standards Division in 2010, before heading up Navigation Safety and International Relations. His current role has responsibility over a number of maritime safety matters, aids to navigation, the management of vessel tracking, coastal pilotage, plus government and international coordination matters.

Mr Groves first became involved with the IMO in 2001. He previously chaired the IMO Sub-Committee on Human Element, Training and Watchkeeping and, prior to becoming MSC Chairman, Mr Groves headed up Australia’s delegation to the MSC and supported AMSA’s Chief Executive Officer at IMO Council. He has also been responsible for Australia’s involvement in regional arrangements such as the Asia-Pacific Heads of Maritime Safety Agencies (APHoMSA) forum.

Mr Groves said he was honoured and humbled to be elected as Chairman of the Maritime Safety Committee, and was looking forward to delivering appropriate outcomes for the maritime community.

“Shipping is one of the world’s great industries but it does have its hazards. It’s long been clear that the best way of improving safety at sea is by developing international regulations that are followed by all shipping nations. This remains at the core of the work of the Maritime Safety Committee and the IMO overall,” Mr Groves said.

“I have seen many issues discussed since I was first involved in MSC discussions. Despite the progress we have made, we still have large responsibilities ahead and I look forward to progressing this important work,” he said. 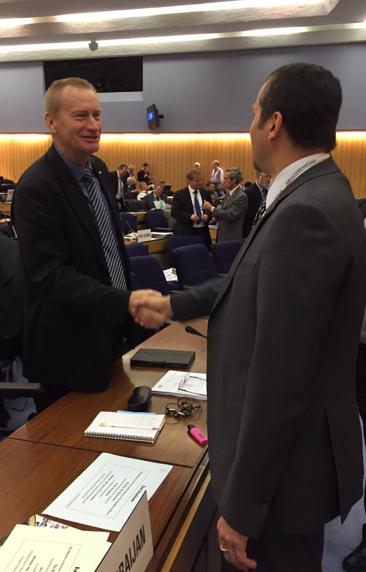 Brad Groves being congratulated on his appointment as MSC Chairman