A multi-million-dollar ship tracking system has been extended to cover the entire Great Barrier Reef from the Torres Strait to Bundaberg, a measure which will prevent maritime accidents and safeguard one of Australia’s most precious environmental icons.

Federal Infrastructure and Transport Minister Anthony Albanese today joined Queensland Ports Minister Craig Wallace in Townsville to ‘turn on’ the extension to the Great Barrier Reef and Torres Strait Vessel Traffic Service (REEFVTS) to cover the southern portion of the Marine Park between Mackay and Bundaberg.

“This extension of the REEFVTS to all parts of the Marine Park makes it the largest mandatory ship reporting system in the world, covering the ocean along the Queensland coast,” said Mr Albanese.

“From today, the International Maritime Organisation requires all large vessels transiting through the Park, including those carrying oil, chemicals or liquefied gas, to regularly report their location and route to authorities.

“The progress of each will also be tracked by radio and satellite 24 hours a day, seven days a week.

“The system will also give seafarers important information about water conditions and the movement of other vessels, further helping to prevent accidents which could result in the release of pollution or cause physical damage to the Reef.

"But our efforts to protect the Reef don’t stop there. I will soon be introducing legislation into the Parliament toughening penalties for breaches of our nation’s maritime and environmental laws.

“Our aim here is simple: to deter shipping companies and their crews from engaging in unsafe and irresponsible actions at sea, particularly near our environmentally sensitive marine ecosystems.

“By putting in place smarter regulations and better policing, the Gillard Labor Government is doing all we can to protect our waters and fragile environmental assets for future generations.”

In addition to extending the REEFVTS and introducing tough new maritime penalties, the Gillard Labor Government has:

The REEFVTS – including its extensive network of sensors and communication equipment – is jointly managed by AMSA and Maritime Safety Queensland (MSQ) Mr Wallace said he’s proud this important protection for the Reef is headquartered in Townsville.

“With many economically vital mineral and gas export projects being developed adjacent to this very sensitive marine environment, the completion of this project will boost protection for the reef,” said Mr Wallace.

“There are eleven ports operating adjacent to the Great Barrier Reef, accounting for $17 billion of our nation’s exports.

“Since 2004, the REEFVTS has kept a close watch on vessels from the Torres Strait to almost 100 kilometres south of Mackay. From today, that watchful eye extends further south to cover the entire Great Barrier Reef Marine Park.

“While the southern portion of the Reef may be easier to navigate than elsewhere, the grounding of the bulk coal carrier Shen Neng 1 off Gladstone in 2010 confirmed that nothing can be taken for granted when it comes to protecting our marine environment.

“While we can’t directly influence the crew behaviour of multinational shipping giants, this gives us the best chance to catch them before they get into trouble.”

An investigation by the Australian Transport Safety Bureau (ATSB) concluded that the grounding of the Shen Neng 1 on the Douglas Shoal was caused when a fatigue affected chief mate failed to alter the vessel’s course.

The Townsville-based REEFVTS command centre is a $5 million state-of-the art facility commissioned in early 2010 and which now operates 24/7, with a staff of 15 keeping a watch over vessels transiting through the Marine Park. 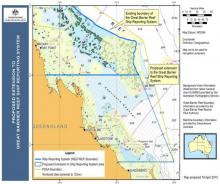