Tuesday 2 April 2019
The 2018 PSC report demonstrates AMSA’s PSC regime is exerting a positive influence on the quality of vessels arriving in Australia.

As a nation surrounded by water Australia relies on sea transport for 99 per cent of its trading. Our national livelihood depends on ensuring that maritime trade to and from the country remains safe, efficient and compliant with all relevant international conventions.

AMSA is Australia’s statutory authority empowered under International conventions and the United Nations Convention of the Law of the Sea (UNCLOS) to check and control ships in our waters so that they do not pose threats to ship and crew safety or to the marine environment.

Port State control (PSC) is an essential device that allows AMSA and other marine authorities around the world to maintain maritime standards.

AMSA has approximately 60 marine surveyors across Australia that conduct PSC inspections and every year AMSA publishes a report on the results.

PSC is an inspection regime for countries to inspect foreign-registered ships in that country’s port and enables them to take action against ships that are not in compliance with the relevant conventions.

Inspections can involve checking that the vessel is manned and operated in compliance with applicable international law, and verifying the competency of the ship's master and officers, and the ship's condition and equipment and labour conventions.

If a ship is found not be compliant with a relevant convention/s then AMSA can issue a deficiency requiring action to be taken to bring the ship into compliance. The deficiency must be addressed by the vessel and the corrective action verified by AMSA surveyors before such deficiencies can be noted as resolved.

If a vessel is found to be substantially non-compliant then AMSA may detain a vessel. Detention is intended to ensure that a vessel will not sail until it is compliant and can proceed at sea without presenting a danger to the ship, crew or marine environment. The vessel will remain detained until all detainable deficiencies are addressed and corrective action has been verified by an AMSA surveyor. Only when this process has been completed will the vessel be released.

Where a vessel is found to repeatedly fail to meet relevant international mandatory standards then AMSA may ban the vessel by issuing them with a direction not to enter or use an Australian port for a set period of time.

Three vessels were banned from using or entering an Australian port in 2018. One vessel was issued with a letter of warning.

The 2018 figures indicate that deficiencies and detentions are decreasing.

Overall the PSC report demonstrates AMSA’s PSC regime is exerting a positive influence on the quality of vessels arriving in Australia. 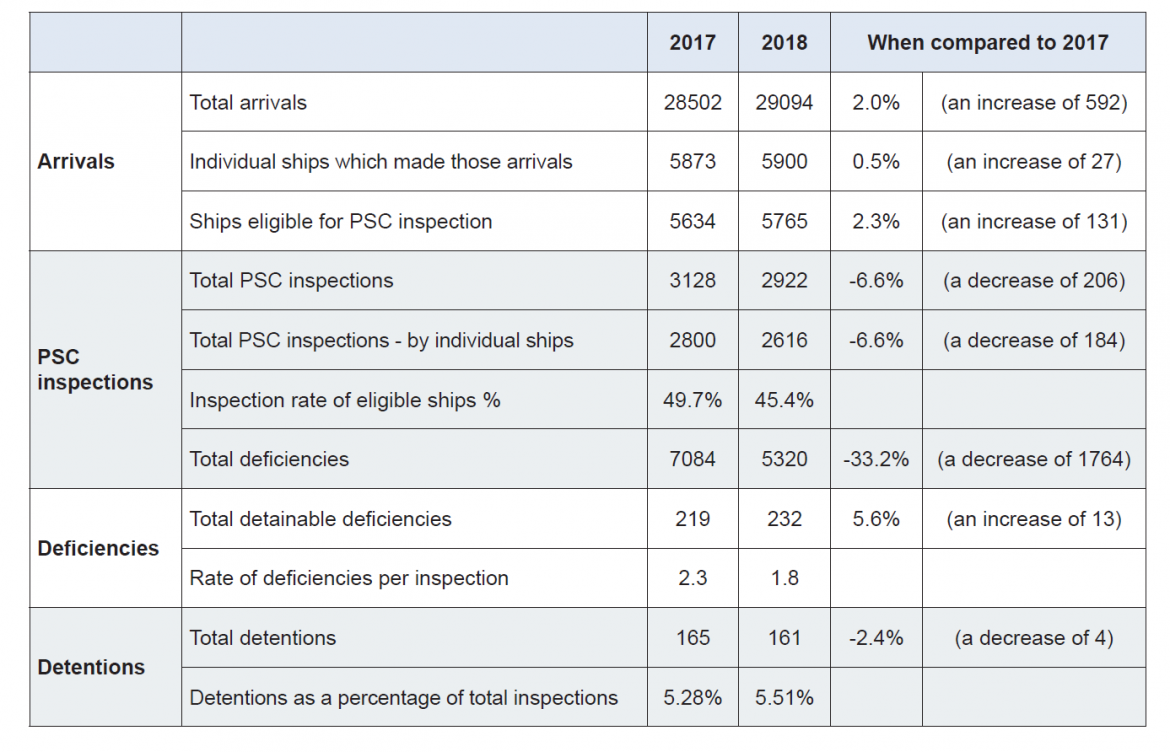 As a nation surrounded by water Australia relies on sea transport for 99 per cent of its trading....

This report summarises our PSC activities and provides details about the performance of commercial...