AMSA notes with concern that since November 2017 several pilots’ lives have been placed at risk, in six separate incidents where man ropes have parted, or its securing point has failed. In addition, AMSA regularly receives reports and complaints about non-compliant pilot transfer arrangements

The requirements in SOLAS V/23 are the minimum standards for equipment installed and arrangements for pilot transfers on ships on or after 1 July 2012. The IMO standards can be found in:

SOLAS V/23.2.3 also states a pilot ladder shall be certified by the manufacturer as complying with SOLAS V/23 or “with an international standard acceptable to the Organization” and refers to ISO 799:2019 “Ships and marine technology – pilot ladders”.

Compliance with this particular provision of SOLAS V/23 can be met when a manufacturer has certified the pilot ladder complies with either of the above standards, noting they are not identical.

Paragraph 10.1 of Part A of the International Safety Management Code (ISM) requires vessel operators establish procedures to ensure a ship is maintained in conformity with the relevant rules and regulations, including pilot transfer arrangements. Such procedures should include regular inspections of the pilot transfer arrangement and storage of such equipment when not in use. 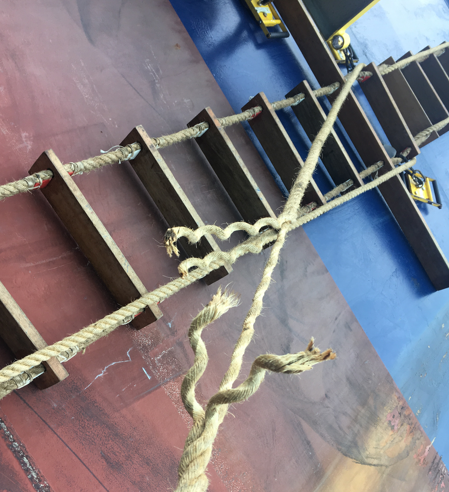 Example of an unsafe man rope

Responsibility for safe practices for personnel transfers rests with each person involved in the activity including the vessel owners, operators, master and crew, pilotage providers, pilots and pilot boat crew, as well as the person being transferred. All parties should observe both the spirit and intent of the regulations, to ensure safety is not compromised.

Where a marine pilot suspects that the pilot transfer arrangement provided is unsafe, they should refuse to use the arrangement until it is made safe by the master and crew and report the circumstances to AMSA. Where such situations occur, AMSA will endeavour to follow-up to determine the cause and actions taken. Where a vessel is not calling into an Australian port, AMSA will follow up with the flag State.

This and other useful guidance material are available on the AMSA website and in the AMSA Pilot mobile App.

When conducting port State control inspections, AMSA inspectors will pay particular attention to the material state of all equipment and the implementation of MO21, Res.A.1045(27), ISO 799:2019, MSC.1/Circ.1428 and MSC.1/Circ.1495/Rev.1. The relevant IMO circulars and resolutions can be obtained from AMSA or www.imo.org.

During recent PSC inspections AMSA surveyors have noted pilot ladders which have been constructed with splices in the side ropes.

Pilot ladders constructed like this are considered non-compliant by AMSA. Vessel operators and vessel masters are recommended to check their pilot ladders for splices in side ropes.