3.1 General history of lighthouses in Australia

The first lighthouse to be constructed on Australian soil was Macquarie Lighthouse, located at the entrance to Port Jackson, NSW. First lit in 1818, the cost of the lighthouse was recovered through the introduction of a levy on shipping. This was instigated by Governor Lachlan Macquarie, who ordered and named the light.

The following century oversaw the construction of hundreds of lighthouses around the country. Constructing and maintaining a lighthouse were costly ventures that often required the financial support of multiple colonies. However, they were deemed necessary aids in assisting the safety of mariners at sea. Lighthouses were firstly managed by the colony they lay within, with each colony developing their own style of lighthouse and operational system. Following Federation in 1901, which saw the various colonies unite under one Commonwealth government, lighthouse management was transferred from state hands to the Commonwealth Lighthouse Service.

Lamps and optics: an overview

Lighthouse technology has altered drastically over the centuries. Eighteenth century lighthouses were lit using parabolic mirrors and oil lamps. Documentation of early examples of parabolic mirrors in the United Kingdom, circa 1760, were documented as consisting of wood and lined with pieces of looking glass or plates of tin. As described by Searle, ’When light hits a shiny surface, it is reflected at an angle equal to that at which it hit. With a light source is placed in the focal point of a parabolic reflector, the light rays are reflected parallel to one another, producing a concentrated beam’.10

In 1822, Augustin Fresnel invented the dioptric glass lens. By crafting concentric annular rings with a convex lens, Fresnel had discovered a method of reducing the amount of light absorbed by a lens. The Dioptric System was adopted quickly with Cordouran Lighthouse (France), which was fitted with the first dioptric lens in 1823. The majority of heritage-listed lighthouses in Australia house dioptric lenses made by others such as Chance Brothers (United Kingdom), Henry-LePaute (France), Barbier, Bernard & Turenne (BBT, France) and Svenska Aktiebolaget Gasaccumulator (AGA of Sweden). These lenses were made in a range of standard sizes, called orders—see ‘Appendix 2. Glossary of lighthouse Terms relevant to Cape St Albans Lighthouse’.

Early Australian lighthouses were originally fuelled by whale oil and burned in Argand lamps, and multiple wicks were required in order to create a large flame that could be observed from sea. By the 1850s, whale oil had been replaced by colza oil, which was in turn replaced by kerosene, a mineral oil. 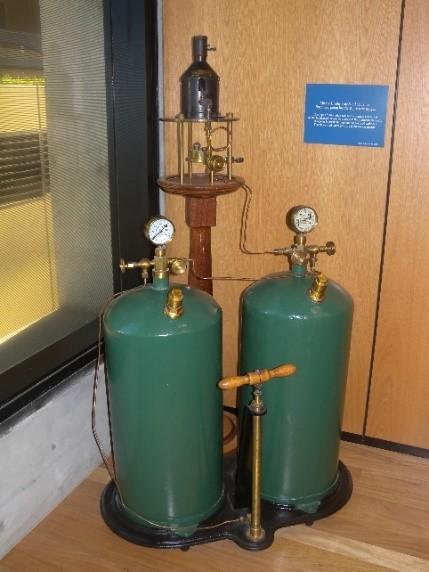 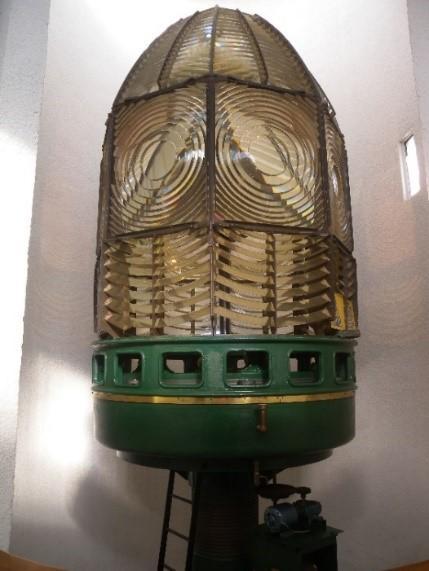 In 1900, incandescent burners were introduced. This saw the burning of fuel inside an incandescent mantle which produced a brighter light with less fuel within a smaller volume. Light keepers were required to maintain pressure to the burner by manually pumping a handle as can be seen in Figure 8.

In 1912, Swedish engineer Gustaf Dalén, was awarded the Nobel Prize in physics for a series of inventions relating to acetylene-powered navigation lights. Dalén’s system included the sun valve, the mixer, the flasher, and the cylinder containing compressed acetylene. Due to their efficiency and reliability, Dalén’s inventions led to the gradual de-staffing of lighthouses. Acetylene was quickly adopted by the Commonwealth Lighthouse Service from 1915 onwards.

Large dioptric lenses, such as that shown in Figure 9, gradually decreased in popularity due to cost and the move towards unmanned automatic lighthouses. By the early 1900s, Australia had stopped ordering these lenses with the last installed at Eclipse Island in Western Australia in 1927. Smaller Fresnel lenses continued to be produced and installed until the 1970s when plastic lanterns, still utilising Fresnel’s technology, were favoured instead. Acetylene remained in use until it was finally phased out in the 1990s.

When the Australian colonies federated in 1901, they decided that the new Commonwealth government would be responsible for coastal lighthouses—that is, major lights used by vessels travelling from port to port—but not the minor lights used for navigation within harbours and rivers. There was a delay before this new arrangement came into effect. Existing lights continued to be operated by the states.

Since 1915, various Commonwealth departments have managed lighthouses. AMSA, established under the Australian Maritime Safety Authority Act 1990, is now responsible for operating Commonwealth lighthouses and other aids to navigation, along with its other functions.

Kangaroo Island has an extensive history, and the island is embedded in the Ngurunderi Dreaming Story.
Ngurunderi, an ancestral being, chased two of his wives along the coastline of Encounter Bay. When they tried to cross the waters to Kangaroo Island, Ngurunderi made the ocean rise and flood what is now known as Backstairs Passage. His wives were drowned and became the Pages Islands. Ngurunderi then travelled to Kangaroo Island where, at the far end of the island at Admiral’s Arch, he threw his spears down into the sea which created the Casuarina Islets. Ngurunderi then cleansed himself in the ocean before passing into the spirit world.

More than 100 cultural heritage sites, which include stone artefact scatters, have been uncovered on the island, and radiocarbon dating undertaken on the western end of the island demonstrated the presence of Aboriginal groups for thousands of years.

Sally, also known as Kalinga and Princess Con, is a notable figure in the history of the island. Sally was the daughter of King Condoy, the headman of Ramindjeri. In the late 1820s, Sally was taken from her home in Cape Jervis by sealers to King George Sound, and then onto Kangaroo Island by the early 1830s. She later married William Walker and had two sons, George and Joseph who were both born on the island.

Kangaroo Island was first sighted by British explorer Matthew Flinders aboard the HMS Investigator on 23 March 1802. Flinders had landed on the north coast of Dudley Peninsula and, after noting the large number of western grey kangaroo present, named the landmass ‘Kangaroo Island’.11 The island was later circumnavigated and mapped by French explorer Commander Nicolas Baudin.

In 1836, the First Fleet of South Australia reportedly stopped in at the island’s Nepean Bay en route to the mainland. These ships, such as the Duke of York, the Lady Mary Pelham, and the Africaine, carried the first European settlers that would establish the city of Adelaide and the colony of South Australia. The first colonial settlement on Kangaroo Island was Kingscote (originally Reeves Point) established in July 1836.12

The 1840s saw the operation of whaling stations on the island’s coastline. Shipping around Kangaroo Island also grew exponentially during this time period as the island sat on either side of the Backstairs Passage and the Investigator Strait, two key shipping routes. Increased shipping led to many instances of shipwrecks around the island, which in turn led to the construction of lighthouses: Cape Willoughby in 1852 and Cape Borda in 1858.

A number of shipwrecks had occurred within Backstairs Passage since the mid-1850s, and a lighthouse at Cape Jervis on the mainland had been constructed in 1871 in an attempt to aid vessels.13 Following the turn of the century, calls for the erection of an additional light gathered momentum.14 In 1905, South Australian authorities readdressed concerns for the safety of vessels traversing the passage, and it was debated whether a new light was to be constructed, or whether Cape Jervis Lighthouse should be upgraded. Talks of constructing a new manned light were put to bed when it was determined to be far too expensive. However, advances in technology at the time meant there was the option of constructing an unmanned, automatic light.15

Cape St. Alban’s was chosen as the appropriate site for the new unmanned light due to its prominent position in the south-east of the passage. It was determined that a light on the cape would alert vessels to ’an obstruction known as the Scraper‘, and also provide navigators ’another bearing’.16

Choosing to erect an unmanned, automatic light meant that the design for the lighthouse was relatively simple and did not require the inclusion of any keepers’ cottages. The tower was designed to be a small, circular stone structure fitted with a self-contained lantern on an open plan (see Figure 11).

Tenders for the construction of the light were first called in early 1908, however fresh tenders were called once more in April of the same year.17 A self-contained lantern manufactured by Barbier, Bernard and Turenne in France was ordered and installed. It is understood that the construction of the light progressed faster than anticipated. The Register (Adelaide) newspaper reported that:

Although the original notice to mariners concerning the Cape St. Albans light, in Backstairs Passage, was that it would be exhibited for the first time on or about December 1, the President of the Marine Board decided that it should be shown for the first time on Thursday night. Better progress was made with the erection of the lantern and its adjustment than was expected, hence the reason for utilizing it earlier than first arranged.18

Cape St. Albans Lighthouse was lit for the first time on 20 November 1908. The total cost of the lighthouse’s construction and equipment was £897.19 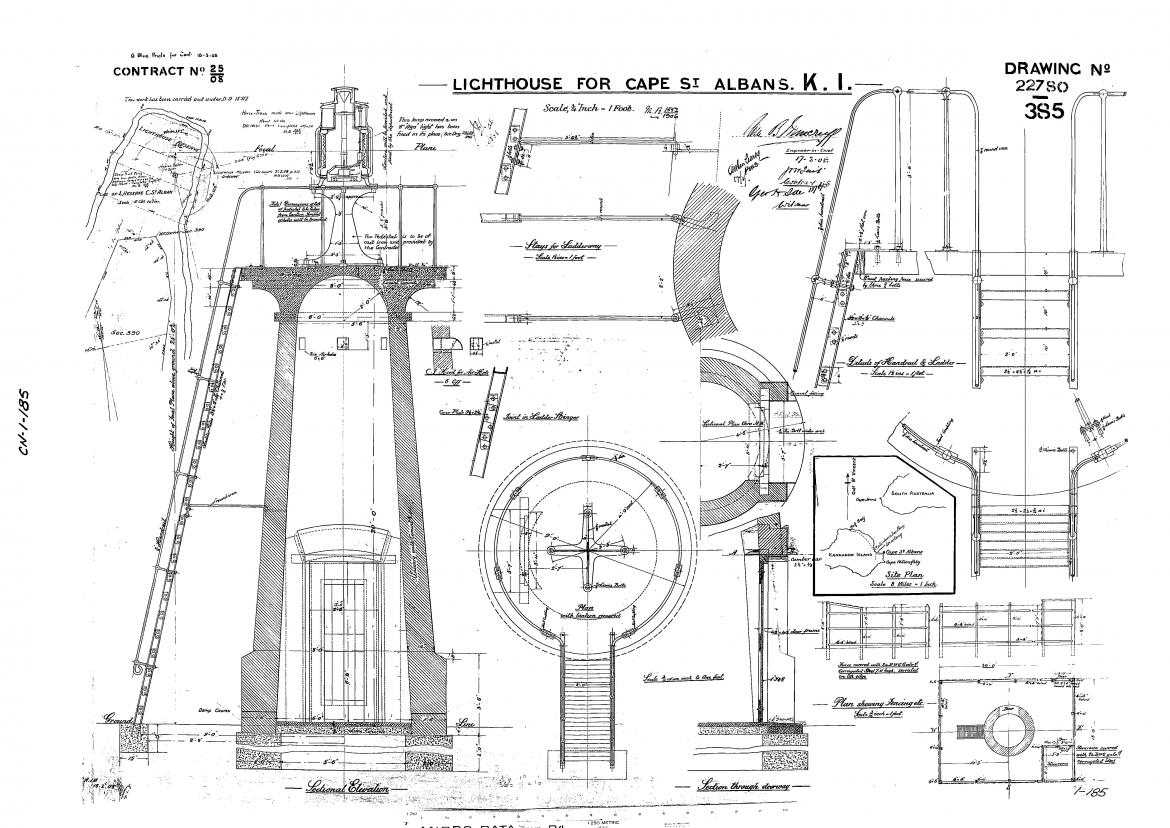 Upon completion, Cape St. Alban’s Lighthouse stood as a nine-metre, white masonry tower fitted with an unenclosed white, 4th order, fixed light.20 A red sector light was also installed to shine over ‘the Scraper’. The Register newspaper reported the tower had a focal plane of 120-feet, and the light was visible for approximately 17 miles.21 Powered by kerosene, the tower was originally visited once every two days by the headkeeper of Cape Willoughby Lighthouse. By 1912, the responsibility of maintaining the light was transferred to a local resident of Antechamber Bay who visited the lighthouse once a day until 1914.22

The following table details the major events to have occurred at Cape St Albans Lighthouse.

3.6 Changes and conservation over time

The following section details the changes and conservation efforts to have been carried out at Cape St Albans Lighthouse since its construction.

Commander CRW Brewis, retired naval surveyor, was commissioned in 1911 by the Commonwealth Government to report on the condition of existing lights and to recommend any additional ones. Brewis visited every lighthouse in Australia between June and December 1912, and produced a series of reports published in their final form in March 1913. These reports were the basis for decision-making for the individual lighthouses and provide a snapshot of the lighthouse in the early twentieth century.

Brewis recommended that the Cape St. Albans Lighthouse be discontinued.29

Alteration to the light

The following table details the changes to the Cape St Albans light since its exhibition in 1908.

The following table details the recent conservation works to have occurred at Cape St Albans Lighthouse.

3.7 Summary of current and former uses

From its construction in 1908, Cape St Albans Lighthouse has been used as a marine AtoN for mariners at sea. Its AtoN capability remains its primary use.

3.8 Summary of past and present community associations

The Ramindjeri Heritage Association Inc. draw direct connection to King Condoy, headman of Ramindjeri, and Princess Con. Ramindjeri people observe the island to be a ‘gateway to heaven’, and maintain strong ties to the island

Cape St Albans Lighthouse is considered a significant site of South Australian and Australian history. The cape and lighthouse maintain strong familial associations due to the lighthouse’s history as a locally-maintained site.

Any unresolved questions or historical conflicts uncovered will be highlighted within this section in future versions of this plan.

Archaeological investigation of the site may reveal further information on prehistoric and historic uses of Cape St Albans to broaden understanding of the site’s intrinsic value.

29 Brewis, Lighting of the South Coast of Australia, 16.