The lighthouse is located on the Montague Island Nature Reserve, a protected reserve approximately 82 ha in size. The island is outlined with rugged, steep cliffs with landing only possible at two sheltered locations on the western side of the island. 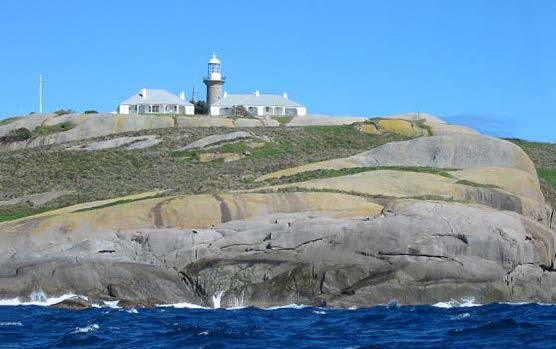 Classified as a nature reserve by NPWS, Montague Island is recognised for its abundance of unique fauna and flora.

The island supports NSW’s largest colony of Eudyptula minor (or little penguin) that breeds on the island. Additionally, Australian fur seals and New Zealand fur seals are regular visitors to the Island with up to 10,000 counted along the shores during peak season.

Humpback whales are frequently spotted passing Montague Island during spring, with some Orcinus orca, or killer whales, occasionally seen in nearby waters.

The island has approximately 90 bird species that migrate to the area throughout the year. Of these, 12 species are known to nest on the island including short-tailed shearwaters, wedge-tailed shearwaters, Gould’s kites, peregrine falcons, swamp harriers, crested terns, and silver gulls.

Over 200 plant species have been identified on Montague Island.2 Whilst many are introduced to the island, the majority of the island is covered by Lomandra longifolia (mat-rush). Other flora recorded includes:

A Montague Island Nature Reserve Plan of Management was published in 1996 and offers additional information on the environmental management of the reserve.b NPWS is currently undertaking a review of this plan.

The Montague Island lighthouse and surrounding land is managed by the New South Wales State Government. AMSA lease the lighthouse and land from NPWS.

The AMSA lease consists of one parcel of land (Lot 1) which encompasses the lighthouse tower alone.

The current lease was signed on 9 July 1998, commencing on 1 July 1997 and terminating on 30 June 2022, with an option to renew for a further 25 years. The lease stipulates that AMSA must comply with any applicable management plan and state environmental laws.

Due to public interest in Montague Island and the lighthouse, a tourism license was signed between AMSA and the NSW Minister for the Environment commencing 1 July 1997, ceasing on 30 June 2022 with a renewal option for a further 25 years.

Montague Island is a gazetted Aboriginal Place and a Native Title claim application is currently active under the South Coast People.

The table below details the various heritage listings of the Montague Island Lightstation.

Montague Island is only accessible to authorised vessels and approved contracted boat operators. No private vessel landing is permitted. Vehicular access from the landing site at Jetty Bay to the lighthouse is available for authorised vehicles only. Access trails, some of which are historically significant, are maintained on the southern section of the island. The Montague Island Lightstation features as a landmark on the Montague Island walking track which ensures pedestrian access to the site. Access inside the lighthouse is restricted to authorised personnel and tour groups only.