In the lead up to World Maritime Day 2019—Empowering women in maritime—on 26 September, we are profiling a number of women in a variety of roles across the maritime industry.

We ask some women to tell us what drew them into their specialty and how they are making their mark.

Current role and brief background in the maritime industry

Being raised in Port Lincoln definitely aided my decision to study for my Bachelor of Administration (Marine Resources) which is a fisheries management degree.

Then I moved to New Zealand and worked for the Ministry of Fisheries as an observer. I would verify catch independent of the vessel, collect data to underpin the quota management system and undertake marine mammal and bird observations.

I generally worked a roster 50 days on, 50 off on board large deep sea trawlers fishing a number of species including orange roughy, hoki, blue whiting, squid, mackerel and hake. These expeditions took me all over New Zealand from the Chatam Rise to the Challenger Plateau and the Auckland Islands on the way to Antarctica.

Often I was the only female and English speaker on board and it was a real culture shock, but I had a sink or swim moment when I thought ‘the NZ government thinks you can do this, so get on with it’.

During my time off I would often work for Australian Fisheries Management Authority as an observer on demersal or pelagic long-liners.

As the research and liaison officer for Australia Southern Bluefin Tuna Industry Association, I’m heavily involved in hands-on operations in the aquaculture industry. 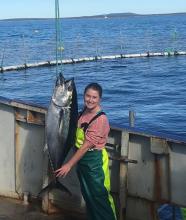 (jpg?itok=qLCQvTnr )
The fishing industry in Port Lincoln is male-oriented and it didn’t enter my head that I could work on a boat as it was not work role-modelled by women in the town.

In year 12, my school offered marine biology as a subject and that’s when I started thinking about further study in the maritime sector.

I realised that women in this industry were not unheard of – in fact there should be more of us!

What do you enjoy most about your job?

The diversity of the role – working on a tuna harvest one day, cutting up guts for scientific sampling on another, meeting dignitaries at a luncheon, data entry and reporting – there’s such a variety of work to do.

Working on the Russian trawlers was a character forging experience and helped me to develop resilience.  I was awarded the National Seafood Young Achiever Award at Seafood Directions in 2015, so that was a great highlight.

What motivates you each day?

An urge to contribute and be an active member of society.  I don’t want to be on the sidelines and have people miss out on valued contributions to our society.

Olivia Newton-John who took a lot of risks that paid off and now she gives back through her charities.

New Zealand Prime Minister, Jacinda Ardern, is an amazing woman, she’s given birth during her role and she and her partner are excellent role models for flexible parenting, which is crucial to female participation in the maritime workforce.

What would you say to women interested in joining the maritime industry?

Try pairing education with practical experience, which may mean for example, marine biologists have to actually get down to working as a deckie early in their career.

I’m a single-parent with a two-year-old daughter, so to be honest there isn’t much down time, but I love to catch up with mates and enjoy a glass of wine with them.

Cape Pallister in Wairarapa, on the southern tip of the North Island of New Zealand.