A Woman at Sea—In celebration of World Maritime Day 2019

When Commodore Fiona Freeman joined the Royal Australian Navy in 1988, women were on the precipice of change in the maritime industry.

Fiona Freeman is a shining example of how being a woman need not be a barrier to achieving professionally. As a Commodore in the Royal Australian Navy, she is a testament to women being equally capable and successful in leadership roles. 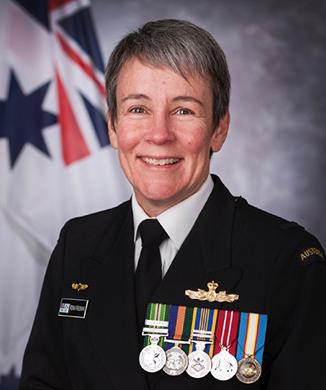 Commodore Fiona Freeman joined the Royal Australian Navy in February 1988. Back then, there was little wiggle room for advancement through the naval ranks. Although women have been part of the Royal Australian since 1941, since 1988 '...women had only been able to fill permanent seagoing positions for the previous two years,' Commodore Freeman says.

However in 2019, Commodore Freeman looks back on her 30 year career and reflects upon both the challenges and evolution of opportunity for women in the Royal Australian Navy.

‘The maritime sector has historically been very much a male dominated industry. However, that is changing.’ Commodore Freeman says.

As a Junior Officer, Fiona spent time at sea in HMA Ships Stalwart, Flinders, Moresby and Paluma and HMNZS Monowai. In 1992 she circumnavigated the globe as part of the international commemoration of Christopher Columbus' journey 500 years earlier. Fiona was also aboard the HMAS Jervis Bay when it deployed to Somalia in 1993 as part of Operation Solace. Her career has travelled the distance of change, however in her formative years she notes—there were very few women whose lead you could follow.

‘There were very few female role models, especially in the seaman branch or in high-ranking positions. Although all women recruited after 1984 were advised that they were eligible for service at sea, substantial numbers of women did not get to sea until the early 1990s,’ Fiona says.

‘After initial training I quickly found myself at sea—in those days though, females could only serve in auxiliary ships or in survey ships—a total of only five ships throughout the fleet. Moreover, female participation across all roles in Navy equated to only 10 percent of the workforce,’ Commodore Freeman says.

Despite the scarcity of women in the Royal Australian Navy, nor tangible pathways for leadership for promising female officers, Commodore Freeman was able to carve out a path for herself. Fortuitously and perhaps simultaneously, the maritime sector was transforming for women as Fiona progressed through her career and she recognises the Navy is now sailing towards leadership opportunities for women in the Royal Australian Navy.

Nowadays, the Navy workforce is comprised of over 22 per cent women. Obviously still a way to achieving equity, however Fiona maintains it is important to acknowledge women have a definitive place in the naval workforce.

‘Women have the opportunity to serve in any area within the service—from aviation and engineering to submarines and intelligence. They make a critical contribution at all levels—two females have reached the rank of admiral and more are following close behind. Females command and serve in all classes of Australian navy ships,’ Fiona says.

And she is justifiably satisfied with her achievements having fulfilled a long and successful career. Commodore Fiona Freeman serves as a pioneering example of possibility for women considering leadership careers in the Royal Australian Navy.

‘I am proud to be part of an organisation that continues to support women, and I only hope within the Maritime community that there are increasing numbers of females who realise that gender is no barrier to achieving whatever they desire.’

And on World Maritime Day 2019, Commodore Fiona Freeman shines a light on the progress women have made and the opportunity now open to women in the Royal Australian Navy.