AIS AtoN stations broadcast a nine digit maritime mobile service identity (MMSI), position and status information at least every 3 minutes. Broadcasts can originate from an AIS station located on an existing physical AtoN (Physical AIS AtoN), or from another location such as an AIS Base station.

When an AIS base station signal is broadcast to provide an AIS signal linked to an existing physical AtoN, this is called a ‘Synthetic AIS AtoN’.

When an AIS base station signal is broadcast to provide an AIS signal to a location in a waterway where there is no physical AtoN, this is called a ‘Virtual AIS AtoN’.

AIS AtoN can enhance safety of navigation via one or more of the following means*:

AIS AtoN are described using specific terms. It is important to understand what the various terms mean. In 2014, the International Maritime Organisation (IMO) issued MSC.1/ Circ.1473 (Policy on use of AIS Aids to Navigation).

An AIS AtoN is a digital aid to navigation promulgated by an authorized service provider using AIS Message 21 “Aids to navigation report” that is portrayed on devices or systems (e.g. Electronic Chart Display and Information System (ECDIS), radar, or Integrated Navigation System (INS)). An AIS AtoN can be implemented in two ways:

Physical1 AIS AtoN refer to AtoN that actually exist – for example, a buoy or a beacon. Physical AIS AtoN transmit an AIS signal from the actual AtoN itself.

The important aspect is that the actual AtoN is being depicted correctly, as required, for the mariner to see both on the ship’s navigational display(s) and through the wheelhouse window.

Spotting the difference between physical (or synthetic) and virtual AIS AtoN

Each ship, coast radio station (fitted with Digital Selective Calling (DSC)) and AIS AtoN is allocated a unique 9 digit identification number (MMSI). The MMSI is permanently programmed into the equipment and is broadcast with each transmission.

All AIS AtoN MMSI numbers are of format 99, followed by a three-digit Maritime Identification Digit (MID), followed by a unique four-digit identifier.

There are some protocols to be aware of:

The protocol can be summarised in the following diagram:

If, in a coastal pilot’s opinion, the ship’s onboard ECDIS or other navigational display is displaying an AIS AtoN information incorrectly, an SV-HH report should be made to AMSA. This link provides access to a word, PDF or online SV-HH form for reporting purposes.

The email address for submitting reports to AMSA is reports@amsa.gov.au.

If incorrect AIS AtoN information is being displayed on a pilot’s Portable Pilot Unit (PPU), the PPU may require updating to the latest software / catalogue library. Advice of the error should also be reported to AMSA’s Coastal Pilotage section via email to NSIDPilot@amsa.gov.au.

The IMO provided amended guidelines for the presentation of navigational-related symbols, as follows:

Physical AIS AtoN shall be presented as an ‘open diamond’. The diamond shall be drawn using a thin solid line style (see Figure 1 below).

Virtual AIS AtoN shall be presented as an ‘open diamond with crosshair centred at reported position’. The diamond shall be drawn using a thin dashed line style (see Figure 2 below). 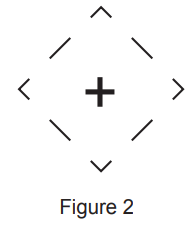 Further information about AIS AtoN symbology can be found in IMO SN.1/Circ.243/Rev.1: Amended Guidelines for the Presentation of Navigational-Related Symbols, Terms and Abbreviations (available via the IMO website).

1 Physical AIS AtoN may be referred to as Real AIS AtoN in other technical documentation.