Wednesday 8 October 2014
Last week five Tasmania Police officers were recognised for their outstanding contribution to search and rescue at this year’s Australian Search and Rescue Awards in Sydney.

The winning officers were involved in the rescue of 3 fishermen off Tasmania’s south-west coast on 3 January 2014 in extreme weather conditions. The rescue effort started when AMSA’s Rescue Coordination Centre detected a distress beacon from a vessel about 1.5 kilometres west of South West Cape on the evening of 2 January.

The vessel had broken down and was drifting in huge seas of up to 12 metres and winds of more than 100km/h. AMSA tasked its search and rescue Dornier aircraft, a Tasmania Police helicopter and the Tasmania Police vessel Van Diemen from Hobart to respond. Due to the weather conditions, the helicopter was forced to turn back. The lighthouse keeper from Maatsuyker Island played an important role in talking to the people on board the stricken vessel throughout the response.

The Van Diemen battled heavy seas for several hours before coming within sight of the vessel in the early hours of 3 January approximately 1 kilometre from Maatsuyker Island. The vessel had drifted about 24 kilometres from when the distress beacon was first activated. Treacherous conditions prevented the Van Diemen from approaching the vessel due to risk of collision. The crew of the Van Diemen deployed a Rigid Hull Inflatable Boat (RHIB) to rescue the three fishermen, who were forced to enter the water minutes before they would have been swept onto rocks.

The officers were nominated by an AMSA search and rescue officer, and their colleagues at Tasmania Police.

Due to the high calibre of nominations this year, the National Search and Rescue Council also presented a Commendation Award to the crew of the Navy Seahawk helicopter Tiger 74 from Nowra’s 816 Squadron.

The Navy Seahawk crew were recognised for their role in rescuing a French couple Bernard and Dominique Lorencea after their yacht sank off the New South Wales coast on 29 September 2013. Search and rescue authorities were alerted that the couple were in distress after they managed to contact New South Wales Police via a satellite phone. AMSA was requested to assist and tasked its search and rescue Dornier aircraft to a location more than 700 kilometres east of Eden, issued a broadcast to shipping and requested military assistance. The Dornier aircraft was able to drop survival equipment to the couple, including a life raft. The couple was winched from the life raft by the Navy Seahawk helicopter at the limit of its endurance after their yacht eventually capsized.

AMSA’s Emergency Response General Manager and Chairman of the National Search and Rescue Council, John Young, commended all the award recipients on their expertise as search and rescue professionals.

“In both incidents, these men employed their skills and talent to overcome extremely adverse weather conditions which resulted in the saving of five lives”, Mr Young said.

“I’d also like to thank all the men and women involved in search and rescue across the country for their bravery and commend them for their contribution to saving lives,” he said. 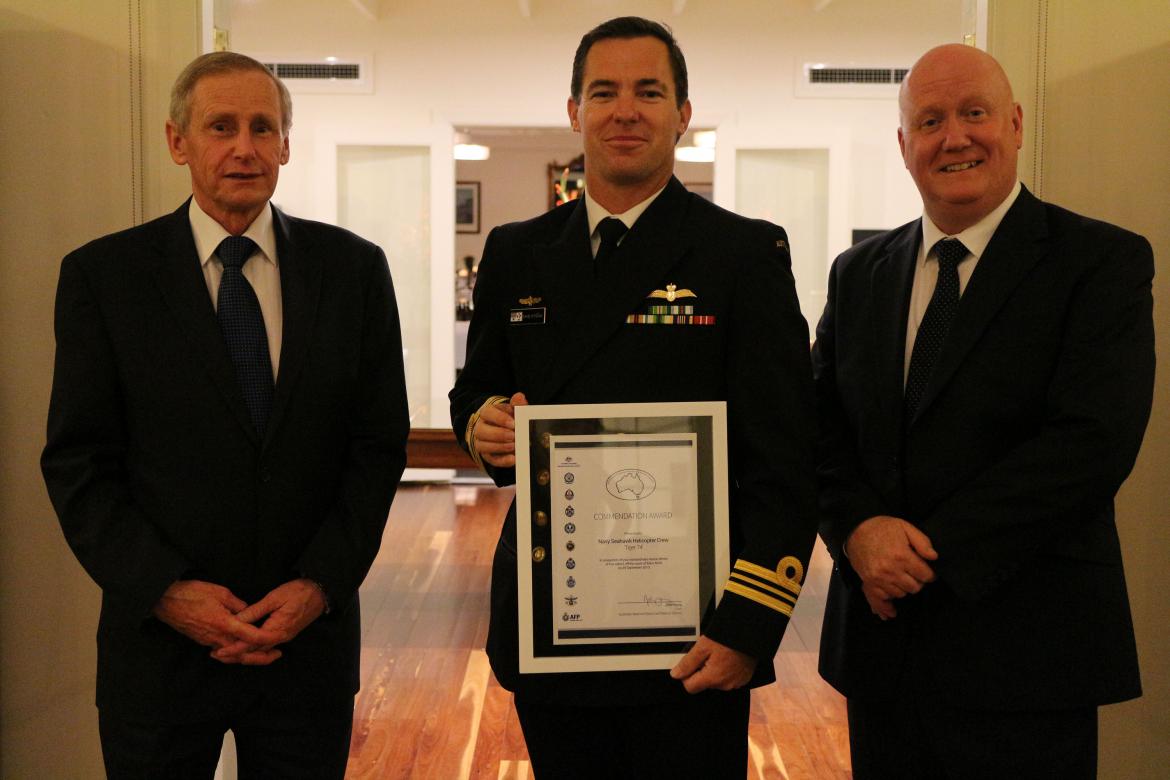