In this issue we have information from the VTS advisory group, give you the news about the VTS award, provide information about the IALA Risk Management Toolbox and more.
29 September 2020 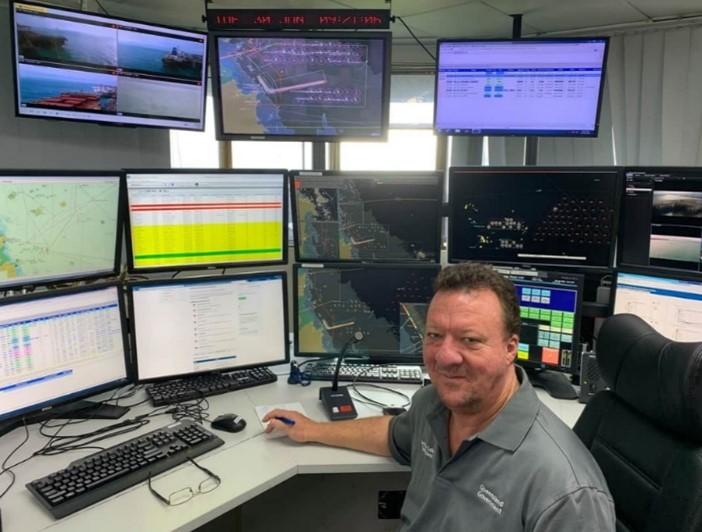 Warren was nominated for coordinating the response action of allied services—including tugs, port pilots and helicopter operators—when reports came through of a bulk carrier drifting 20 metres off the berth at Hay Point at 1am on 21 April 2019.

Warren’s quick response ensured the vessel was brought back alongside within three-and-a-half hours with no damage to the bulk carrier, other ships berthed at the port, the offshore terminal infrastructure and no pollution event.

In assessing the nominations, the VTS award selection panel—comprising representatives from Australia’s VTS authorities and AMSA—was of the view that all nominations adequately addressed the criteria for nomination and were of a high calibre.

Two other nominations have been highly commended:

The VTS award was launched in December 2019 to recognise an outstanding contribution by a VTS to the safety of life at sea, safety and efficiency of navigation, and the protection of the marine environment.
Nominations for the 2020-21 VTS award open on 1 October 2020.

With the new IMO resolution for VTS expected to come into effect in 2021, the committee is actively engaged in a major review and update of the IALA standards related to VTS.

Following cancellation of the committee’s March meeting due to COVID-19 restrictions, four correspondence groups were established to focus on documentation associated with:

AMSA has been actively engaged in each of the groups. This work will be considered by the VTS committee at its online meeting 21 September to 15 October 2020.

Workshop on VTS Training and Qualifications

The VTS committee hosted an online workshop VTS Training and Qualifications, 2020 and beyond (15 and 18 June 2020). This was the first online IALA workshop and successfully highlighted the potential for such events. In summary:

The advisory group hosted an online workshop on 29 July to review the outcomes from the recent IALA workshop VTS Training and Qualifications, 2020 and beyond.

This workshop provided the opportunity for members to consider the outcomes from the IALA workshop and possible implications for IALA’s current review of its Recommendation R0103 (V-103) on Training and Certification of VTS Personnel.

The next meeting of the advisory group is scheduled for 28 and 29 October.

VTS-related events coming up at IALA include:

Originally planned for September this year, the seminar is now scheduled for 8 to 12 February 2021, due to COVID-19 restrictions. The venue remains unchanged—Port Education Centre, Melbourne.

The focus of the seminar is to provide detailed instruction, including case studies and hands-on practical use of IALA’s risk models:

As a qualitative tool, PAWSA is exploratory and the analysis component seeks to get a deeper understanding of why a certain phenomenon occurs, its associated consequences and the potential effectiveness of additional mitigation measures.

A comprehensive explanation of PAWSA can be found in IALA Guideline 1124.

The IALA Waterway Risk Assessment Programme (IWRAP)—This program provides a standardised, quantitative method to evaluate the probability of collisions and groundings in a given waterway. It is a Windows-based software program, which allows different scenarios to be developed so that changes—such as those in traffic volume or composition, route geometry, aids to navigation or the introduction of other mitigating measures—can be modelled.

Comprehensive explanation of IWRAP can be found in IALA Guideline 1123.