On Sunday 9 January 2012, the cargo vessel the MV Tycoon broke free from its mooring at Flying Fish Cove, Christmas Island, and washed against the seawall and nearby cliff face. The ship had been loading phosphate at the time of the incident.

Around 7 am on 9 January 2012 (Christmas Island time) the MV Tycoon had broken in half, consequently sinking adjacent to the cliff and the crane at Flying Fish Cove.

The MV Tycoon was carrying approximately:

It is believed the majority of the oil on board leaked quickly and dissolved in the heavy sea conditions into the local water column, washing up on nearby beaches or floating out to sea.

The crew were all recovered with the assistance of the Royal Australian Navy and the Australian Federal Police.

The National Plan was activated and a marine pollution response incident coordinator and a casualty coordinator from the Western Australia Department of Transport, appointed by AMSA under National Plan arrangements, arrived on Christmas Island on 9 January 2012.

Clean-up of the spilled oil proved to be challenging during the swell season. However, the rough weather assisted in naturally dispersing much of the leaked oil into deeper waters offshore.

Although heavy weather restricted clean-up operations and regularly prevented clean-up teams from venturing on to the beach for safety reasons, a large contingent of volunteers assisted with:

Sporadic re-oiling of the beaches continued as the vessel was impacted by varying weather and sea conditions, requiring ongoing involvement of the National Plan until 17 February, when local control was delegated. During this time further discharges were very limited and most efforts focused on oiled debris removal.

The final AMSA deployment was able to complete the beach clean-up using heavy machinery for eight days. Local support throughout the response was overwhelmingly positive.

On 16 April, after the owner failed to take responsibility for the wreck, AMSA formally announced the government’s decision to manage the wreck removal operation. 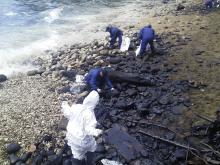