Should we use dispersants?

Dispersants can be effective response tools. Use of dispersants is dependent on many factors including timing, properties of the oil, and logistics.

Once spilled into the water or stranded on a coast, oil begins to change, which has implications for the use of dispersants. This process is known as weathering. It is a complex process as the chemical and physical properties of oils interact with external factors and is not easily explained. The type and rate of weathering is affected by:

Detailed explanations of weathering can be found in the related information section below.

There are eight main weathering processes; four tend to occur early, and have a significant effect on dispersability.

The below weathering processes tend to have little influence on dispersant decisions or operations. 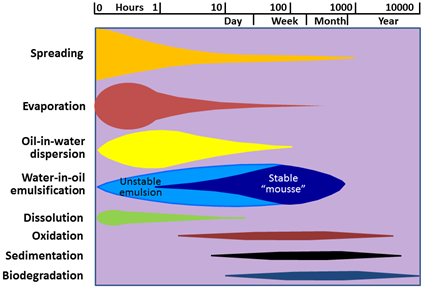 In general, dispersants tend to work best with lighter, thinner oils, in more energetic conditions. So in general, it is best to apply dispersants earlier, if conditions are appropriate.

Dispersant application is less limited by ambient conditions than other options. Mechanical recovery can be limited by sea state and slick thickness. Image of Figure 2: Window of opportunity for mechanical recovery and dispersant spraying response strategies based on ambient conditions (based on Allen, A. 1998)

Figure 2. Window of opportunity for mechanical recovery and dispersant spraying response strategies based on ambient conditions (based on Allen, A. 1998).

Four factors determine whether a chemical dispersant operation can be successful:

The complexity created by the interactions of the oil type, the weathering process and ambient conditions has resulted in the development of sophisticated computer models. These models are able to make predictions about how weathering might progress over time, and resulting response options, like dispersant application. However, the results are modelled predictions, and caution should always be used in interpreting results.

As these influence and effect each other, the complexity of interactions is often hard to predict. There are some general rules of thumb, but they need to be applied with caution and experience, hence the use of programs like Automated Data Inquiry for Oil Spills (ADIOS), as shown below.

All other things being equal:

If oil weathering is suspected in an oil spill incident, then modelling changing oil properties using ADIOS is strongly recommended. Modelling can be used to assess changes in viscosity, natural dispersion, evaporation, density, potential to emulsify, etc. It can then determine the window of opportunity for use of chemical dispersants.

The following figures, derived from ADIOS2 analyses, demonstrate the influences of different ambient conditions on marine diesel and intermediate fuel oil spills, to show how these affect weathering and fate. For a nominal spill volume of 100 cubic metres, two local wind speeds (constant 5 knots and 15 knots) in two water temperatures (15°C and 25°C) were used to predict changes over five days (120 hours).

For a relatively light oil like refined marine automotive diesel (API 31.6; a pour point -12°C; and viscosity of 16.8 cSt @ 15°C), ADIOS predicts that at lower wind speeds (5 knots) the biggest weathering effects will come from evaporation (the blue area below), while with more mixing energy (at 15 knots) the biggest factor will be natural dispersion. Water temperature has little effect. Viscosity starts low and remains well below 1000cSt throughout. For IFO180, a much heavier refined product with a molasses-like quality (API 14.7; unknown but very high pour point; viscosity of 2404cSt @ 15°C, with 51 per cent aromatics, 10 per cent asphaltenes, and 11 per cent resins) the predictions are very different. Right from the start the spilled IFO180 is likely to be too thick to disperse, and as the aromatic and lighter components evaporate, this will quickly compound. Neither the different water temperatures nor the different winds speeds (wave mixing energies) have significant influence on this oil, with all scenarios resulting in around 75-80 per cent of the oil remaining after 120 hours. 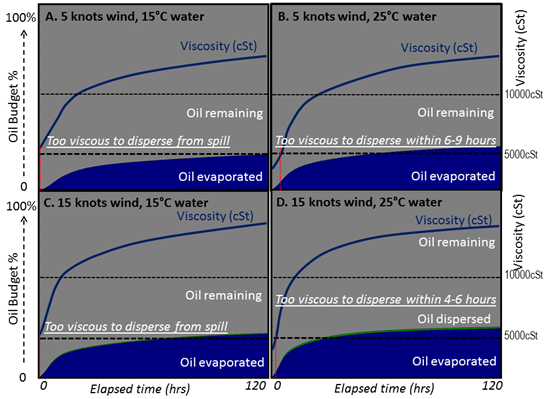 Dispersants not held in AMSA or AMOSC

The Finasol OSR 51/52 OSCA-Registered dispersants are not, as at January 2019, held in AMSA or AMOSC (including industry) Australian dispersant stockpiles. OSRL ,in Singapore, holds 350,000 litres each of Finasol OSR 52 and Dasic Slickgone NS, in their Global Dispersant Stockpile. If imported, both are acceptable for use in a National Plan response.

We recommend responders in Australia use the NOAA ADIOS2 Tool (Automated Data Inquiry for Oil Spills version – soon to be version 3 as a web tool) to model the oil weathering and to inform the fate of the oil.

Two types of output can be generated:

To demonstrate the effect of these conditions on the physical properties of a selection of oils, we ran the ADIOS computer software on two main risk oils: a marine diesel and an intermediate fuel oil (IFO-180); and a West Australian crude to demonstrate the output types.

ADIOS can produce output in various ways, including graphs like those shown in Figures 3 and 4 above, showing each of the various weathering processes and an overall outcome for the time period sought. It also provides a mass balance table and a text file with the inputs selected and any commentary about the oil and its behaviour. Below is a series of the outputs for a Western Australian crude oil being produced off the Dampier coast.

Table 2. The spill scenario, and calculated oil parameters for the conditions provided

Note that the table will present some very pertinent data—specifically density and viscosity—to make it relevant to the local sea temperature, in this case 25°C, although the data provided in the oil parameters table in ADIOS may have these data relevant for other temperatures. This greatly assists the responder as the conversions to ambient temperatures have been done for you.

Below in Figures 5-10 and Table 2 are the various relevant outputs for the 120 hour projection, with notes attached and embedded. 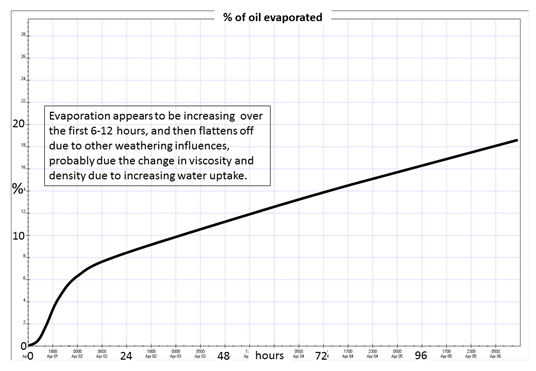 Image of Figure 7: Water content as a percentage of the total volume (effectively showing the level of emulsification) over 120 hours

Figure 7. Water content as a percentage of the total volume (effectively showing the level of emulsification) over 120 hours. 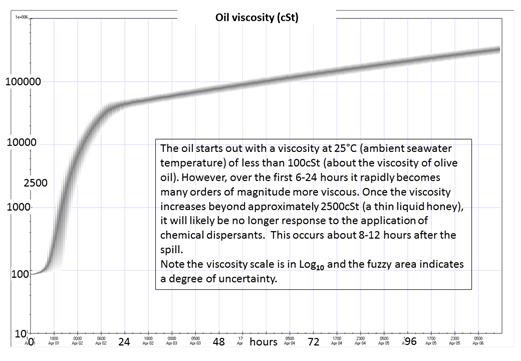 Image of Figure 8: Viscosity change (in cSt) over 120 hours 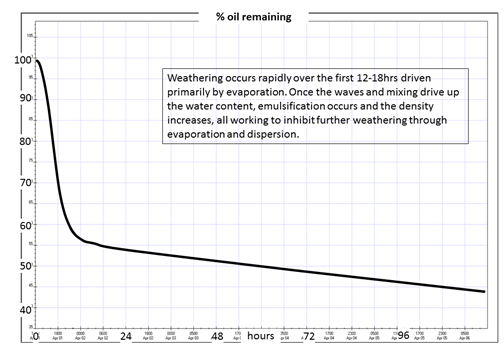 Image of Figure 9: Oil remaining as a percentage of the original volume spilled over 120 hours

Figure 9. Oil remaining as a percentage of the original volume spilled over 120 hours. Another form of output from ADIOS is a mass balance table over a period of 120 hours.

Table 3. The spill scenario oil budget table, for the parameters provided and calculated.