A SPOT tracker distress signal was detected near Lake Disappointment southeast of Karratha in Western Australia. We tasked a rescue helicopter from Coondewanna, while WA Police arranged a ground response from Reward Mine which is operated by Fortescue Minerals Group. The Reward Mine ground party located an injured motorcyclist and the rescue helicopter arrived soon after. The motorcyclist had an accident earlier that morning and had been trapped under his motor cycle. Fortunately, a passing vehicle had provided assistance. Apart from some bruising the motorcyclist suffered minimal injury and after staying overnight at the Reward Mine, was able to continue his journey. 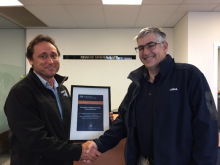 We detected a distress beacon registered to a dory on the FV Eltorito approximately 26 kilometres south east of Cape Grenville in Queensland. Attempts to contact the fishing vessel were unsuccessful. We diverted two fixed wing aircraft to the area and one of which located an overturned dory, with two people clinging to the hull.

Contact was eventually established with the FV Eltorito who was able to use another dory to safely recover the crew members.

Cairns Water Police contacted us requesting assistance via air coordination in the search for an overdue dinghy. The dinghy with four people on board had failed to return from a turtle hunting trip on the Bloomfield River, near Cape Tribulation Queensland. We tasked our Cairns Challenger 604 aircraft and the Queensland government rescue helicopter for an initial night search of the area.

At first light the following day both aircraft were again tasked to the search area and located the overdue vessel at Rosser Reef. All four occupants were winched to safety and later reported that their vessel had capsized during the night, they managed to right the dinghy, but in the process lost their fuel container. The dinghy did not carry any safety gear.

We received several distress beacon signals from the Australian registered yacht Lara II, who was participating in the Sail 2 Indonesia Rally and had run aground on a reef within Indonesia’s search and rescue region.

Coordination was transferred to the Indonesian search and rescue agency BASARNAS, who later confirmed that the crewman had been rescued and transported to Meror Village at Maluku Island.

This was the second time that we had responded to requests for assistance from the Lara II. A week prior the yacht had issued an Urgency broadcast to shipping after losing all power on board while transiting through the Howick Island Group in the Great Barrier Reef. In this instance our emergency towage vessel Coral Knight was diverted and assisted with providing a replacement battery. 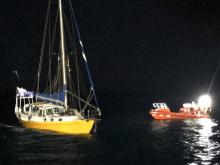 We detected a registered distress beacon northwest of Karumba, in the Gulf of Carpentaria. With assistance from Qld Police it was determined that we were looking for a 6 metre runabout with an adult male, and possibly a cattle dog on board. The vessel was reported to have departed Karumba Boat ramp for two days of recreational fishing.

The Karumba and Burketown volunteer marine rescue vessels were tasked for a surface search along with our Essendon based Challenger, which located the upturned fishing vessel but no signs of the missing person. Additional assets were tasked including the Cairns Challenger, three local fixed wing aircraft and rescue helicopter Rescue 510.

VMR Burketown together with Rescue 510 sighted the missing person 500 metres from the capsized fishing vessel, 13 hours after the beacon was activated. The survivor was taken back to Burketown by VMR Burketown. 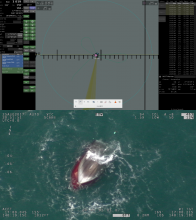 Checks with the flying school found that the aircraft had been flying a few minutes prior to the beacon detection. We tasked the NSW Ambulance rescue helicopter from Belmont who located the crash site a few hundred metres from the main runway. Both people on board survived the crash. 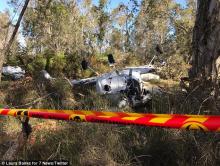 We received two separate distress alerts from the MV Majorca in the Vitiaz Strait north of Papua New Guinea. A broadcast to shipping was issued and while AMSA could not contact the MV Majorca directly, a ship responding to the broadcast reported that the MV Majorca had lost all power and was aground on a reef off the southwest coast of New Britain.

At the request of MRCC Port Moresby, we tasked the Cairns Challenger to drop communications equipment to the vessel. The vessels Master advised that the vessel was stable and no one onboard was in immediate danger. A number of video and still images were taken and passed to the vessel's owners to assist with salvage arrangements. 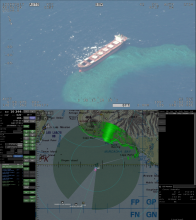 We detected a distress beacon on the Gun barrel Highway 171 kilometres north west of Warburton, Western Australia. The beacon was registered as being used by two adventure motorcyclists. We tasked our Essendon based Challenger who located the motorcyclists, one of whom was injured, and conducted a drop of a satellite telephone.

Warburton Police and Ambulance attended the scene and after consultation with the Royal Flying Doctor Service it was determined that a helicopter was required to recover the injured motorcyclist back to Warburton. 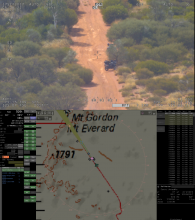 The Captain of the container ship BSL Limasol reported that a male crewmember was suspected to be overboard from his vessel between 63 kilometres northeast of Cape Moreton and 90 kilometres northeast of Sandy Cape in Queensland - a total distance of 266 kilometres.
We issued an urgency broadcast to shipping and tasked the Cairns and Melbourne based Challengers and two local fixed wing aircraft to search an area of 7,333 square kilometres.

The following day a search area of 9,929 square kilometres was searched twice with our Challenger and seven local fixed wing aircraft. Search conditions were good with a number of objects sighted, unfortunately no sightings of the missing person. Search operations completed at last light on Sunday 1 October at which time medical advice indicated that the time frame for survival had past. 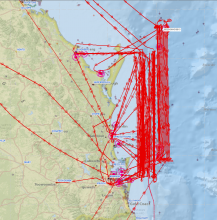 We assisted Queensland Police in a wide area search for an overdue dinghy with two people on board in north eastern Torres Strait. The vessel failed to return from a fishing trip near Darnley Island and was not carrying a distress beacon.

We conducted drift modelling and tasked two Challenger jets to search an area of 1,920 square kilometres. One of the Challengers sighted the vessel broken down and displaying a V sheet. The Horn Island based rescue helicopter conducted a winch recovery of the two survivors who were cold and wet, but otherwise unharmed from their 20 hour ordeal. 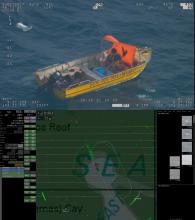 We were advised by Queensland Police that the FV Dianne, a 17.9 metre sea cucumber diving vessel with seven people on board had sunk in a position 16 nautical miles south east of Round Hill, Queensland the previous evening. The alarm had been raised by one crew member who had been rescued from the water by passing Yacht On the Level that morning.

QLD Police assumed coordination of the incident and requested our assistance to conduct an air search over three days looking for survivors from the FV Dianne. There were numerous sightings of floating debris in the search area but unfortunately, no sightings of the missing crew members. A statement made to Police by the survivor indicated that he was aware of at least two crew members inside the capsized hull when the vessel sank, and that he did not see any other crew members on the surface at the time of the vessels sinking.

We detected distress beacon that had been lent to two bushwalkers near Mount Bimberi, ACT. After discussions with ACT Police and taking into account the remote location, time of day and deteriorating weather, we tasked helicopter Rescue 201 from Canberra, while ACT police arranged a ground response. Rescue 201 located the bush walkers and winched in a paramedic.

Brisbane air traffic control advised us that a Robinson 44 (R44) helicopter with four people on board had ditched into the ocean 11 kilometres west of barb Reef, Whitsunday Island Queensland.

The R44 declared a radio mayday and activated the aircraft’s distress beacon. An aircraft that was in the area and the charter vessel MV Sea Odyssey diverted to the ditching location. The R44 landed on the water, floats deployed, and all four people were rescued by the MV Sea Odyssey, safe and well.

A Cessna 172 suffered engine failure south west of Kalgoorlie, Western Australia. The pilot broadcast a MAYDAY call and activated his distress beacon before losing communications with Melbourne air traffic control. We tasked a fixed-wing aircraft from Kalgoorlie and a helicopter from Bunbury to track the beacon signal. WA Police tasked police, fire and ambulance assistance. The aircraft was located crashed in low scrubby terrain, both occupants were uninjured. 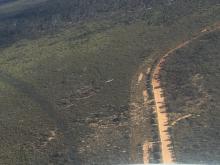 We received multiple beacon detections, one beacon associated with a 10 metre catamaran and one unregistered beacon detected a short time later in the same area. The beacons were associated with charter vessel Relentes/12982Q on a fishing trip with four people on board.

We requested Gladstone Water Police source response vessels, and tasked our Cairns Challenger and rescue helicopter Rescue422. A broadcast to shipping was issued and the dive vessel Gatcombe from Heron Island, fishing vessels Babarusa and Warlord responded. The Gatcombe recovered four survivors from their life raft and transported them to Heron Island.

Shortly before midnight, a pilot transfer helicopter with two pilots on board ditched while enroute to the bulk carrier MV Squireship north of Port Hedland, Western Australia.

One of the pilots was rescued at about 1am, while the other pilot remained missing. Search operations for the missing pilot continued overnight, and through the following two days with no success. We tasked eight helicopters, AMSA’s Perth Challenger and numerous surface vessels which covered an area of 100 square kilometres before we suspended search operations at last light on 16 March. With assistance of side scan sonar equipped vessels Western Australia Police were able to locate the submerged wreckage of the helicopter on 17 March, the missing pilot was located still inside the helicopter. 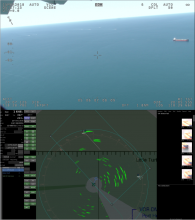 Townsville Water Police requested our assistance to locate an overdue vessel with two people on board between Mornington Island and Betinick Island, in the Gulf of Carpentaria. The vessel had been reported overdue after it had failed to return at last light the previous day. Townsville Police tasked the Mornington volunteer marine rescue, a local police vessel and the Cairns based rescue helicopter to search nearby islands.

We tasked the Cairns based Challenger, who located the broken down vessel and was able to advise that another vessel nearby had taken the vessel undertow back to Mornington Island. 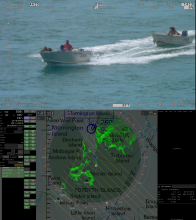 Queensland Police notified us of an overdue gyrocopter with one person on board,which had departed Booyan 23 kilometres northwest of Bundaberg Queensland that afternoon, for an airstrip near Yeppoon but had failed to arrive. We commenced an initial night search using two helicopters and our Cairns based rescue Challenger aircraft, the search continued the following day.

Due to minimal information on the flight path of the missing gyrocopter AMSA issued a media request to the public calling for information. As a result a teenage boy came forward with information and the most likely last position of the gyrocopter was found to be around 15 kilometres north of Booyan. The following day we tasked 10 helicopters plus our Cairns based Challenger to search the area with a helicopter locating the crash site 14KM northwest of Booyan. Unfortunately the pilot was located deceased.

Western Australia Police requested we assume coordination of the air search for an overdue small craft containing two youths off Ningaloo Reef. Our Perth based Challenger conducted an initial overnight search in response, before being joined by four search helicopters at first light.

The aircraft searched an area of approximately 1,663 square kilometres and the overdue craft was located 65 kilometres north of its departure point. The two youths were recovered from the dinghy by helicopter and taken to Exmouth Hospital.