Overdue dinghy with 15 persons on board, Mooroongga Island, Northern Territory

The Northern Territory Water Police contacted us for help with a search for a 4.5 metre dinghy, with 12 people reportedly on board, including four children. The dinghy was on a voyage from Galiwinku (Elcho Island) to Milingimbi.

The previous night a telephone call from the missing people to relatives ashore, revealed the dinghy had suffered a mechanical issue halfway through the voyage. A Northern Territory Police aircraft located the missing dinghy—which actually had 15 people on board—broken down and adrift. Our Challenger 604 aircraft diverted to remain overhead the drifting dinghy, relieving the police aircraft which did not have the endurance to remain on scene. A rescue craft reached the broken down dingy and took it undertow to Mooroongga Island.

We received detections of an EPIRB and an Inmarsat-C distress message, near Bunga Head, NSW, from the 20 metre trawler Shoalhaven. We tasked both the Canberra and Moruya based rescue helicopters and the Bermagui volunteer marine rescue vessel to respond.

We received reports that the four crew had made it ashore but were unable to get to a place of safety. The crew were winched to safety by the rescue helicopters and taken to Bermagui. 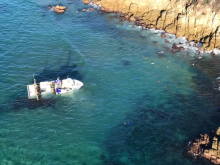 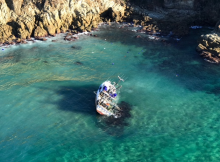 We received a report that the Touraken III with eight Indonesian crew on board was experiencing navigation difficulties near Seven Reefs in the eastern part of the Torres Strait. The Touraken III requested assistance in navigating the Great Barrier Reef from a border force aircraft but communications with the vessel were difficult. Attempts to have the vessel anchor were unsuccessful due to a fault with the anchor winch.

On behalf of Maritime Safety Queensland, we tasked our Cairns Challenger 604 aircraft, and diverted the emergency towage vessel Coral Knight to the area. There were concerns for the vessel and the Master of Touraken III agreed to divert to the nearest port.

The Coral Knight escorted the vessel to Horn Island. On the morning of 13 July, the Touraken III arrived safely at anchorage near Horn Island.

Vanuatu Flag State detained the vessel to ensure it was made seaworthy before continuing on its voyage.

We received a detection from an EPIRB registered to a 4.2 metre dinghy in the Beagle Gulf, a RAAF P3 Orion sighted three flares in the area. 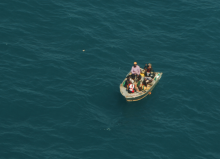 While undertaking a training flight at Barrow Island, a helicopter operated by Babcock Aviation Services reported an overturned half cabin cruiser in a bay to the south of Barrow Island. We requested the aircraft begin searching for survivors immediately.

Investigation of our beacon database and West Australian state recreational vessel database provided details of the former owner, who advised the vessel, with two persons on board had departed Karratha two days prior on a dive trip to Barrow Island.

While undertaking a shoreline search, the Babcock helicopter located two people on Middle Island and transferred them to Barrow Island for medical treatment. 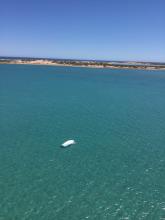 We received a call from the race director of the Golden Global Race reporting that the skipper of the 10 metre twin masted sailing vessel Thuriya had capsized and dismasted. The solo sailor had suffered an incapacitating back injury and was approximately 3420 kilometres west-southwest of Perth.

AMSA issued a broadcast to shipping and tasked a French Fisheries Patrol Vessel Osiris, and liaised with race control in an effort to task other race participants that might be able to assist.

On the afternoon of 24 September, the sailor was evacuated by stretcher from Thuriya to Osiris. Once the skipper’s condition improved, he was transferred at the request of the Indian Navy to the INS Satpura for repatriation to India.

Western Australia Police were conducting a search for an overdue runabout with two persons on board in Shark Bay. They requested our assistance with a forward-looking infrared (FLIR) night search capability and we tasked the Perth Challenger 604 aircraft.

The Challenger located the two people on an island close to where they had launched their boat. The Police arranged for the local volunteer marine rescue vessel to recover the survivors and take them to Denham for medical checks.

A deck hand on board a prawn trawler operating in the Northern Prawn Fishery south of Groote Eylandt, was bitten by a sea snake.

Our Cairns Challenger 604 aircraft was tasked to conduct a medical supply drop. The rescue plane arrived on scene and dropped medical supplies to the vessel. Shortly afterwards a fast catamaran with a medical team arrived. The medical team assessed the deck hand and sadly the young man was deceased. 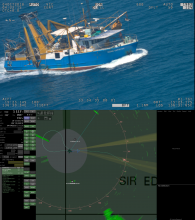 Fremantle Water Police requested our assistance in the search for an overdue half-cabin vessel with four people on board. The vessel had not returned to Woodman Point boat ramp from an overnight fishing trip to Rottnest Island.

The search located two bodies in the water, an upturned vessel hull and numerous pieces of debris. 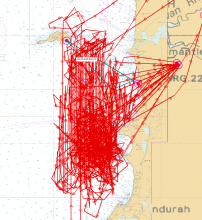 Queensland Police requested assistance to search for a missing motorised hang-glider trike with one person on board. The pilot had gone on a short flight north from Burketown to the coastal area to meet the "Morning Glory" (a bank of cloud that passes through the area in spring).

AMSA tasked the Cairns Challenger 604 aircraft, a rescue helicopter and two local fixed wing aircraft whose pilots were familiar with the nature of the cloud formation and its movement.

The pilot eventually activated his distress beacon and was located to the south of Burketown uninjured having landed safely after becoming disorientated. 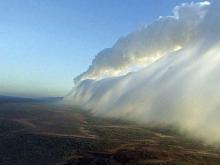 We detected a distress beacon registered to an off-road motorcycle rider. Coordination was transferred to Police Victoria who tasked a rescue helicopter from Warrnambool.

We assisted police by diverting a fixed-wing aircraft that was airborne in the area. The helicopter recovered a seriously injured motorcycle rider and transferred the patient to the Alfred Hospital in Melbourne for treatment.

We detected an unregistered distress beacon in remote Western Australia near Rawlina. WA Police held overall coordination, but requested our help with tasking the of our Perth Challenger 604 aircraft to determine the nature of distress.

The Challenger located two stationary vehicles with two people nearby. WA Police prepared a ground response with a local land owner. Our Essendon Challenger 604 aircraft was also tasked to provide ongoing communication support at the scene. 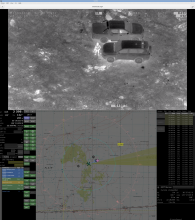 The International Emergency Rescue Coordination Centre (IERCC) reported that a Satellite Enabled Notification Device (SEND) had been activated in a position approximately 120 kilometres east of Alice Springs. The owner’s details were not known, however an emergency contact advised that the device was associated with a Robinson 22 helicopter VH-KZV.

An airborne fixed-wing RFDS aircraft was diverted to the distress position, and a helicopter with a paramedic was tasked from Alice Springs. A mail-run aircraft that was in the area also proceeded to the scene and provided communications relay. A 4WD with two persons and a medical kit was sent from the station which the missing helicopter was operating.

The wreckage of the helicopter was located at the distress position. The passenger had survived the crash but was very badly injured and was transported to Alice Springs by helicopter. The pilot passed away within minutes of the first help arriving.

Fremantle Water Police requested our help to locate a kite surfer who had departed Drummond Cove, north of Geraldton, and failed to arrive at their destination of Coronation Beach.

We provided drift modelling and tasked our Perth Challenger 604 aircraft however when the initial search did not locate the missing person, we were requested to take coordination of the aerial search.

Multiple fixed wing and rotary aircraft were tasked for various search areas over two days including coastal, and offshore areas.

Prior to commencing search four, on day two, the kite surfer was located ashore by the VMR Geraldton vessel.

Western Australia Police requested help in searching for a woman who was reported missing after not returning from a run up Mount Nameless.

Our Perth Challenger 604 aircraft conducted a forward looking infrared electronic search but was unable to locate the missing person who was later located deceased by ground search parties coordinated by Police Western Australian. The Victorian State Air Desk reported that a skycrane had crashed into a dam while on firefighting operations near Mount Gregory. Another firefighting helicopter was overhead and confirmed that the three crew had safely exited the helicopter and were on dry land.

The State Air Desk confirmed that the fire control team onsite had activated the emergency procedure, which included calling police and ambulance. Air Ambulance Victoria tasked a rescue helicopter as well as a road ambulance from Woods Point.

The fire control team transported the three crew members to a cleared area north of the crash site where a police helicopter was able to land and transport them to the Latrobe Valley Hospital for assessment.

We detected an unregistered distress beacon near Winton in Queensland. Police accepted coordination and requested AMSA assist with the tasking of the Cairns Challenger 604 aircraft.

The Challenger located a Hilux Campervan surrounded by floodwater and another camper vehicle with four people standing nearby. A radio was dropped to and the people confirmed they had become stranded and needed help.

Police arranged for a local helicopter to recover them back to Winton.

We were notified of concern for a Cessna 182 light aircraft which, was overdue on a flight from Mount Garnet to Atherton. Local aerodrome checks confirmed that the aircraft had not diverted in flight.

We tasked a rescue helicopter and AMSA’s Cairns Challenger 604 aircraft. Intelligence checks with OZRunways and a mobile phone trace indicated a crash site 13 kilometres south-south-west of Atherton. The rescue helicopter was tasked to the position, located the wreckage and confirmed the pilot was deceased. 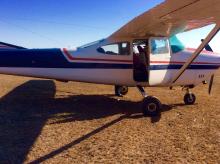 We were advised by the agent of the 270 metre oil tanker Densa Whale that the vessel had stopped for main engine repairs 111 kilometers east of Jervis Bay.  The Marshall Islands registered crude oil carrier was carrying 121,000 tonnes of Nigerian crude oil bound for Brisbane.

Attempts to repair the engine were unsuccessful, and initial plans by the ship owner and Ampol/Caltex were considering an at-sea cargo transfer operation.

After technical and risk-based analysis the decision was made to arrange an ocean tow of the vessel from its current holding position 75 kilometers east of Cape Moreton, Queensland to ship repair yards in Southeast Asia. 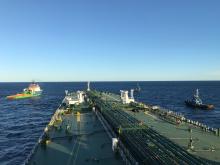 We detected a distress beacon registered to a helicopter with three people on board in remote Northern Territory. They were involved in culling operations for the National Parks and Wildlife Service.

One person was transferred to nearby Cooinda station for transport back to Darwin by fixed wing aircraft. The remaining two injured people were flown back to Darwin for further medical treatment.

AirServices Australia reported that the Southport Aero Club had concern for an overdue aircraft with two persons on board. The aircraft had been undertaking a local aerobatic joy flight over South Stradbroke Island.

Four helicopters were tasked and debris was located on the beach in several locations on South Stradbroke Island. 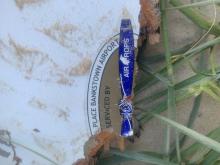