Just before midnight on 24 January 2006, approximately 25 tonnes of heavy fuel oil was spilt from the bulk carrier Global Peace while berthing at the RG Tanner Coal loading facility in Gladstone in Queensland.

The spill occurred as a result of a collision with one of the attending tugs, the Tom Tough, after it suffered an engine failure. The tug swung sharply to port and penetrated one of the Global Peace’s heated day service bunker tanks.

On notification of the incident, the local Harbour Master activated the Port Oil Spill Contingency plan and immediately activated response crews and the Incident Management team. The response to the spill continued for eight days and involved more than 100 personnel. Maritime Safety Queensland (MSQ), as the statutory and combat agency, coordinated the oil spill response through Incident Control Centres in both Gladstone and Brisbane. 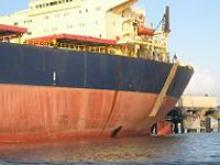 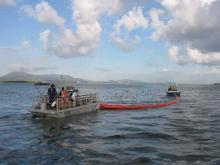 The incident response team comprised operational and administrative personnel from:

Members of the National Plan National Response Team from Canberra, Sydney, Newcastle, Melbourne and Darwin helped to make up the response team. The team included members from the Australian Marine Oil Spill Centre in Geelong and the Oilspill Response Company of Australia.

The spilled oil impacted a recreational beach which was closed due to heavy oiling, and several mangrove areas. Eleven birds were reportedly oiled, with one bird dying. 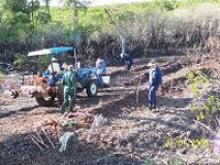 Local fishermen were concerned that future fish catches and breeding grounds would be spoiled. Testing showed that there was little impact on local fisheries due to the oil type and strong tidal flushing.