As a coastal pilot, you are a mariner with expertise in handling large ships in dangerous or congested waters. Your role is to work with the ship's master and/or officer of the watch to ensure safe passage.

You will work in areas where pilotage has been deemed compulsory such as the Great Barrier Reef and Torres Strait particularly sensitive area.

Pilotage is mainly used in ports but can be used in certain coastal locations.

You will join a vessel for part of the voyage, usually arriving and departing the vessel by launch or helicopter.

At no time does your authority exceed that of the ship's master.

The master is accountable for the navigation and management of the vessel. However it is a condition of your coastal pilots licence that you give the master information and advice to assist the master and the vessel’s navigating officers to make safe passage through the pilotage area.

Pilotage has been compulsory within the Great Barrier Reef since 1991. In 2006, Australia's system of pilotage came into existence for the Torres Strait—Great North East Channel (GNEC).

There are five coastal pilotage areas that we regulate: 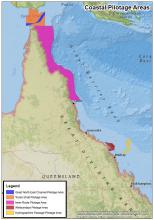 You can also view this coastal pilotage map as a printable PDF.

We regulate coastal pilotage, including pilotage providers and pilots.

While coastal pilotage is an important associated protective measure, it is part of an integrated approach to managing ship safety in the Torres Strait and the Great Barrier Reef and should be viewed in combination with a range of other protective measures.