AMSA General Manager of Standards and NATSAR Chair, Brad Groves said the courageous and selfless efforts of the recipients made in the face of dangerous conditions are worthy of national recognition.

'These brave individuals came to the rescue of strangers without hesitation. They are a source of courage and inspiration, jumping into action when the need arose to save the lives of others.'

The 2018 Australian Search and Rescue award recipients are:

Around 7.30pm on the 10th of September 2017, the Australian Maritime Safety Authority (AMSA) was alerted to a boat in distress. Two men aged 72 and 29 were on board the 28 foot vessel when rough seas caused them to run aground on the rocky entrance of the Elliott River in the Wide Bay-Burnett region of Queensland.

Detective Sergeant Andrew Self from Queensland Police accepted coordination of the incident as the Search and Rescue Mission Coordinator.

Dangerous weather conditions and the position of the boat in shallow rocky waters made it difficult for the rescue boat to get close enough to pull the two men on board. In particular, the 72-year-old man was in a frail condition with limited mobility. With little time to spare, Detective Sergeant Self, who was riding in a smaller State Emergency Services rescue boat, jumped into the water.  He swam 50 meters towards the distressed vessel under rough conditions and in complete darkness. Once he reached the vessel he extracted and guided both men to the rescue boat.

The 72-year-old man was unable to pull himself out of the water into the boat so Detective Sergeant Self protected the man in the water while the rescue boat dragged them to a more sheltered beach where they were able to get the man safely on board. Both of the rescued men were treated for minor injuries, shock and hypothermia. Detective Sergeant Self suffered a sprained wrist but was otherwise uninjured.

The quick response and dedication of Detective Sergeant Self, was a display of courage and bravery in challenging sea conditions. He said:

'I’m honoured to have been nominated, and to have won the NATSAR Professional Award.

I’ve just returned from attending the National Police SAR Manager’s Course (2018) in Canberra where I worked with some of Australia’s finest and most dedicated SAR professionals.

On the night, I was fortunate enough to have worked with a local volunteer SES boat crew who did an amazing job to get me close enough to extract the two men.

The SES boat’s propeller was severely damaged in the rough conditions on the rocks.  Preservation of human life is the highest priority for any officer in the QPS and I’m sure that not one of my colleagues would have hesitated in performing the same duty that night.'  Detective Sergeant Andrew Self.

On the 13th of July 2017 around 1.30pm, the Tasmanian Police Search and Rescue unit responded to an incident involving a 47-year-old French national woman who had fallen five meters in to the Midnight Hole Cave, Mystery Creek Tasmania resulting in a broken leg.

Midnight Hole Cave is a six pitch vertical system, almost 200 meters deep located on the side of a steep hill and is a 50 minute walk to the nearest road.

Due to the cave’s remoteness and challenging location, the incident response involved a number of agencies to rescue the injured caver in a gruelling and complex 12 hour extraction.

The Tasmania Police, Paramedic’s, volunteers from the Southern Tasmania Caverneers, the State Emergency Services and two rescue helicopters were tasked to assist with the rescue.

Paramedics were the first to enter the cave treating the woman and preparing her for the stretcher extraction via a difficult rigging process. At the entrance of the cave, a ground party was awaiting to perform an 800 meter stretcher carry down a steep, slippery hill littered with debris and trees. At the bottom of the hill, a rescue helicopter performed a night stretcher winching operation so the woman could be immediately taken to the nearest hospital.

'I was the emergency contact for the caving party (in the event they were overdue). The trip leader contacted me immediately after alerting Tasmania Police.

I coordinated the caving club’s response (rounding up volunteers to assist the rescue) and liaised with Tas Police to formulate the response plan.

I was put on the first chopper to head down with the two Ambulance Tasmania paramedics and tasked with getting them to the casualty as quickly as possible and, once that was achieved, I focussed on rigging haulage systems to extract the injured woman.

The highlight of the rescue for me, other than its swift and successful result, was the seamless integration of the cavers, Tas Police, Ambulance Tas and SES.

Decades of inter-agency training and general socialising has resulted in a deep mutual respect for one another’s skills and systems. Vertical caves are a particularly challenging environment in which to move around, let alone manoeuvre a seriously injured patient.'

'In my experience it was the biggest and most difficult vertical rescue in this state and potentially the country in recent years.

I played a major part in coordinating the initial response for the rescue which was primarily coordinated underground.  We were working in dark, wet and cold conditions.  The passages ways were narrow and confined sometimes with barely enough space to get the stretcher through. Taking the rescue stretcher down into the cave, helping to secure the woman in it and working with the team to set up the rigging that got her out safely was an experience I will never forget.

The cave rescue was an excellent example of how Police, SES, Ambulance, Volunteers (cavers) and Rotor-lift all worked extremely well together in performing a rescue without any hick-ups in challenging conditions.

Police and volunteers annually conduct training weekends to practice for these events, this training and the relationships that have developed from that training proved themselves this night.' 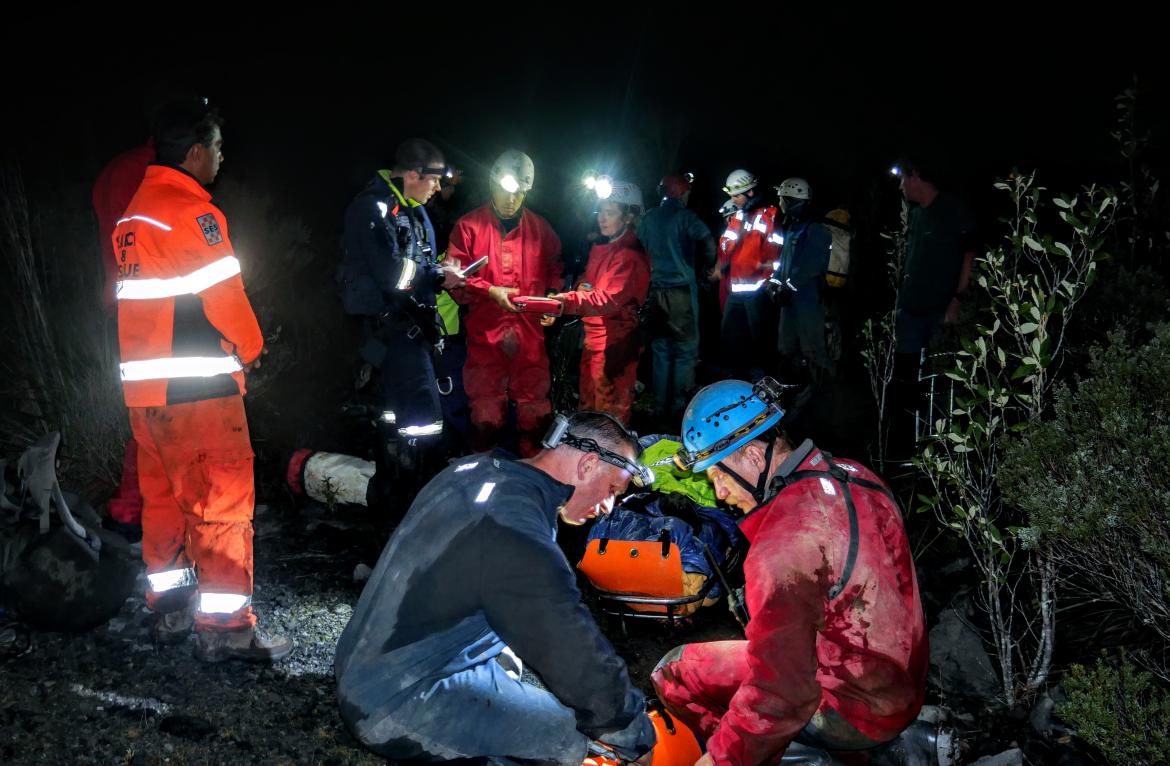 On the morning of 3rd June 2018, Zeb Critchlow and fellow surfer Luke Bugg launched their jet ski from the Boomer Bay boat ramp in south-east Tasmania and headed out to a surf spot at Marion Bay. On arrival, they heard calls for help from surfers already in the water.

The surfers explained that a boat had overturned and to two men were clinging to it and needed help. Both the men had life jackets on, however one jacket had not inflated and this man was unable to swim to complicate matters five-foot surf was closing out over the men.

Zeb steered his jet ski towards the men directing one of them to grab onto the rescue sled on the back. Zeb towed him to a nearby boat outside the surf line returning to rescue the second man who was being battered by large surf.

Upon hearing that there may be a third person trapped under the vessel, Zeb and another friend, Tyler, returned to the upturned boat a third time.

Zeb dived under the boat numerous times, feeling his way around to see if anyone was trapped while Tyler watched on to ensure Zeb remained safe. After many attempts of swimming under the boat, Zeb and Tyler decided to scout the area for another 45 minutes on the jet ski to ensure there was no one visible in the water. Nobody was sighted.

A later conversation with the rescue helicopter crew revealed that unfortunately a third person had passed away.

There is no doubt that if Zeb had not been prepared and willing to risk his own life in order to save others, this may have resulted in two additional lives lost.

Zeb Critchlow said he was humbled by the nomination and the award,  'I’ve been surfing most of my life and I live by three rules: know your equipment, know your abilities and know the weather.'

On November 5th 2017, at 2pm, two men were jet skiing approximately 500m north of the Southport Seaway off South Stradbroke Island, Queensland when they were flung from their jet skis and sucked out to sea in a strong rip.

Although the pair were both wearing life jackets, one man was dragged under the water and swallowed large amounts of sea water, which severely affected his condition.

Joel seeing his friend was in distress, swam across the rip to help him. Joel kept him afloat as they struggled to swim across the rip to shore. Joel’s friend later reported that he wasn’t sure he would make it and if it wasn’t for Joel who kept him in positive spirits, he would have given up.

A Westpac rescue helicopter spotted the two in the water and winched Joel’s friend to safety. Joel managed to swim back to the jet ski and was assisted by a member of Surf Life Saving Queensland who escorted him back to shore.

The swift actions of Joel in reaching his friend to prevent him from drowning and his continued support while they were both facing a risky situation, was a significant contributing factor in saving the life of his friend.