Aquarosa (IMO No. 9506708) - On 1 March 2014, Aquarosa’s free-fall lifeboat was inadvertently released during a routine maintenance inspection while the ship was en route to Fremantle, Western Australia. One crew member was injured in the incident and it took 5 hours for the crew to recover the lifeboat. 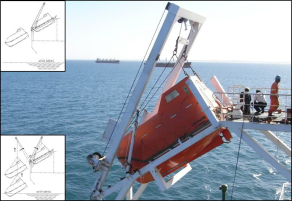 Da Dan Xia (IMO No. 9451290) - On 14 April 2014, the wire lifting sling for the ship’s free-fall lifeboat failed catastrophically during recovery of the lifeboat after a routine launching exercise in Wellington, New Zealand. This resulted in the lifeboat falling several metres into harbour waters. One crew member was injured, and the lifeboat launching davit was rendered unserviceable.

The ATSB found that the hydrostatic on-load release mechanism hydraulic cylinder ram had not fully retracted after use, preventing the stopper block from resetting correctly. This left the release hook in a partially disengaged position.

The ATSB noted that the design of the release mechanism cover plate prevented visual confirmation that the hook was correctly reset. 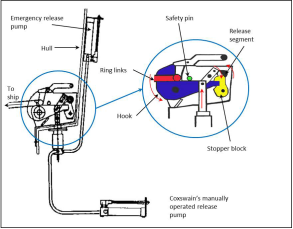 TAIC identified that the wire pennants parted under tensile overload. Subsequent testing confirmed that the sling wires had been significantly weakened by severe corrosion. This corrosion had gone undetected inside a plastic sheathing that the manufacturer had fitted to the wire.
The sheathing prevented the crew from identifying the corrosion and did not allow for lubrication or the application of other corrosion-inhibiting substances. The crew were also unaware of the necessity for greater vigilance and the application of anticorrosive substances during inspections. 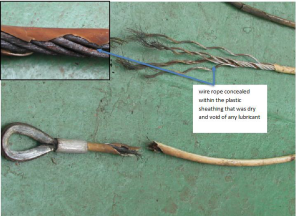 TAIC found that the wires were of adequate strength when manufactured, but that the sheathing allowed saltwater ingress, aiding corrosion by retaining water, and prevented external observation.

Chapter III, Regulation 20 of the International Convention for the Safety of Life at Sea (SOLAS) requires operational readiness, maintenance, and inspection of lifeboats and rescue boats. Under applicable Australian law, owners and operators are responsible for implementing effective routines and procedures that meet SOLAS requirements. These incidents reinforce the need to ensure effective implementation of these processes.

On board safety management

AMSA continues to observe numerous defects and deficiencies related to ship’s lifeboats and life rafts. This is difficult to understand given the IMO and AMSA focus on risks associated with the incorrect operation and maintenance of survival craft.
Wire failure was the critical factor in both the Aquarosa and Da Dan Xia incidents. This highlights the importance of:

Marine Notice 2/2014 highlighted the requirement for additional restraints to be installed on lifeboats during AMSA inspections. This requirement is a control mechanism that AMSA has implemented to reduce the AMSA inspector’s exposure to risk. It is recommended that these restraints be used anytime maintenance is being carried out on lifeboats. The continued cooperation of all owners, operators and masters is appreciated.

More information regarding the details of each investigation can be found at: