To inform all shipowners, operators, masters and crew of the hazards when working with high-pressure fire-fighting systems and the safeguards that may be implemented to prevent injury when working with those systems.

A seafarer suffered serious injury while conducting routine maintenance work on part of a 13 bar high-pressure fire-fighting system on a fire-fighting tug.

Prior to the incident, maintenance on the manifold on the other side of the vessel had been completed without incident. As a result, it was assumed that the system was not pressurised. 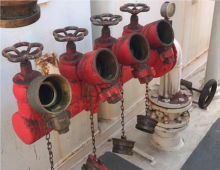 Note: The hydrant in question is closest to the camera. Click on the image to make larger.

The seafarer was attempting to remove the brass blanking cap from a hydrant valve on a manifold of four valves fitted in parallel. The other three valves had been satisfactorily checked 10 minutes earlier.

The seafarer could not release the locking pawl by hand and, assuming that it was seized, utilised multigrips to free it. The line was under pressure and when the 600 gram blanking cap came free it was expelled under pressure and struck the seafarer in the face causing severe facial injuries.

Factors contributing to the incident

An investigation into the incident concluded that the following factors may have contributed:

This incident could have been prevented through effective controls, however, the provision of pressure relief and securing arrangements for the cap would have protected the seafarer where those controls were ineffective.

Blanking caps are also available in a lightweight plastic composite material, which would significantly reduce impact forces should all other controls fail. AMSA supports the use of lightweight alternatives where appropriate.

AMSA also recommends the fitting of securing chains or wires to blanking caps as specified in AS 2419.2-2009—fire hydrant installations. This is designed to prevent the loss of the cap.

Note: the lightweight blanking cap shown above is fitted with a pressure relief hole and a securing chain.

Even where pressure relief arrangements are in place shipowners, operators, masters, and crew are reminded to exercise care when operating with, and working on, any fire-fighting systems. Perform the necessary checks described in the vessel’s safety management system to ensure that no part of the system is pressurised before working on it.