7/2015—Piracy and armed robbery against ships

Preventing and suppressing acts of piracy and armed robbery against ships.

This notice advises shipowners, ship operators and masters of:

The ongoing threat of piracy and armed attacks against ships presents significant challenges to vessels operating in certain regions. To reduce the effectiveness of hostile groups, it is essential that owners, operators, masters and crews of vessels operating in waters where attacks are likely are aware of the actions to be followed to ensure their safe passage. Such actions include appropriate precautionary measures, reporting of attacks and cooperation with criminal investigations when requested.

When entering high risk areas, ships should increase on board surveillance and security levels and prepare means of responding to attacks. A clear and comprehensive Ship Security Plan and the training of crews in security measures and response techniques are critical. While security plans and crew training may not prevent an incident occurring, these precautions should assist in reducing the likelihood of a successful attack and lessen the consequences.

Awareness of the types and extent of piracy and armed robbery attacks made against ships contributes to the coordination of an effective response by authorities. To assist in maintaining a comprehensive operational picture, it is vital that all piracy and related incidents, even minor events and sightings, are reported as soon as practicable.

The IMO’s Maritime Safety Committee (MSC) adopted a resolution in May 2011 on the Implementation of Best Management Practice Guidance, recognising the urgent need for merchant shipping to take every possible avenue to protect against pirate attack. Additionally, to assist in the prevention of piracy and armed robbery, the IMO has produced Circular MSC.1/Circ.1334 Guidance to shipowners and ship operators, shipmasters and crews on preventing and suppressing acts of piracy and armed robbery against ships. The guidance advocates effective self-protection measures as the best defence and recommends areas where action can be taken, such as reducing the amount of cash carried on board and emphasising the need for discretion regarding the future movements and possible cargo of ships.

Each month, the IMO issues reports on piracy and armed robbery against ships. The reports, which include names and descriptions of ships attacked, position and time of attack, consequences to the crew, ship or cargo and actions taken by the crew and coastal authorities, are available at the IMO web site, www.imo.org. The IMO has also opened a Piracy and Armed Robbery module on the Global Integrated Shipping Information System, providing customised reports regarding the type, frequency and impact of attacks.

The International Ship and Port Facility Security Code (ISPS), which came into effect in 2004 and is implemented through Chapter XI-2 (Special measures to enhance maritime security) of the International Convention for the Safety of Life at Sea (SOLAS), contains a comprehensive set of measures to enhance ships’ security. One of these measures is the development of a Ship Security Plan to ensure protection of persons on board as well as the ship and its cargo from any suspicious act or circumstance, including piracy and armed robbery.

The ISPS Code is implemented in Australia through the Maritime Transport and Offshore Facilities Security Act (MTOSFA) 2003 and associated regulations. The Act legislates Australia’s maritime security requirements including matters to be addressed in a Ship Security Plan and the reporting of incidents of piracy or armed robbery. A copy of the Act can be accessed through the ComLaw web site: www.comlaw.gov.au. It is important to note that not all Australia registered ships are regulated under the MTOFSA. Passenger ships used for overseas or inter-State voyages, cargo ships of 500 gross tonnage or more that are used for overseas or inter-State voyages and a mobile offshore drilling unit that is on an overseas or inter-State voyage (other than a unit that is attached to the seabed) are required under the MTOFSA to have a Ship Security Plan.

The ReCAAP Information Sharing Centre (ISC) located in Singapore, established under an inter-governmental agreement in 2006, serves as a platform for information exchange with the ReCAAP Focal points via the Information Network System (IFN). Through the cooperative approach offered by the IFN, the Focal Points are able to provide effective and appropriate responses to incidents. ReCAAP is also aimed at capacity building efforts to improve the capability of member countries in combating piracy and armed robbery in the region.

In Australia, Border Protection Command (BPC) is the lead Government agency responsible for coordinating a response to a piracy incident within the Australian Security Forces Authority Area (SFAA), which covers the same area as the Australian Search and Rescue Region (SRR) (shown at Annex 2). Australia became the 19th contracting party to ReCAAP in August 2013, underscoring Australia’s commitment to the eradication of piracy and the maintenance of secure and safe trade via the sea.

The Australian Maritime Security Operations Centre (AMSOC), located within BPC, is the Australian focal point responsible for coordinating communication to and from the ReCAAP ISC, the Australian shipping industry and other ReCAAP members. More information regarding BPC and AMSOC can be found at: www.customs.gov.au.

The ReCAAP ISC produces quarterly reports detailing regional piracy and armed robbery incidents. These reports, as well as detailed information on the ReCAAP ISC, can be accessed at: www.recaap.org. Members of the public are able to register on the web site, should they need to report an incident of piracy or armed robbery against ships or consult the ReCAAP resource library.

The IMO recommends that in the event of an occurrence masters should report all actual or attempted attacks of piracy and armed robbery or threats thereof, to:

In the event of an occurrence within the Australian SFAA, masters may contact AMSA or BPC (as the ReCAAP focal point) using the following numbers:

Email: reports@amsa.gov.au
(note this email address is not manned 24 hours)

AMSA in conjunction with BPC will manage an incident in accordance with existing procedures and provide assistance as appropriate. BPC will subsequently submit an incident report to the ReCAAP ISC and neighbouring Focal Points.

In the event of an occurrence in foreign waters, in addition to contacting the nearest RCC, masters may also report incidents of Piracy and Armed Robbery to the International Chamber of Commerce (ICC) managed IMB Piracy Reporting Centre (PRC) in Kuala Lumpur. The centre operates 24 hours a day and can be contacted on the Maritime Security Hotline numbers:

A flow diagram for reporting piracy and armed robbery incidents in Asia is included at Annex 1 to this notice.

A constant radio watch should be maintained with the appropriate shore or naval authorities when in areas where attacks have previously occurred. Continuous watch should also be maintained on all distress and safety frequencies, particularly VHF Channel 16. Ships should also ensure all maritime safety information broadcasts for the region are monitored e.g. NAVTEX and EGC SafetyNET service.

The IMB PRC broadcasts incidents of piracy and armed robbery to all ships in the Indian Ocean Region and the Atlantic Ocean Region via InMARSAT Safety Net System.  Live feeds are also available through the ICC website: www.icc-ccs.org/piracy-reporting-centre/live-piracy-report

If an incident alert is received by AMOSC concerning the Australian SFAA, AMSOC will liaise with AMSA to ensure a broadcast to all ships and facilities within the area is issued.  AMOSC will also communicate relevant global incident reports through an established email distribution to industry groups and identified government entities.

For further information regarding maritime security and travel in Australia: 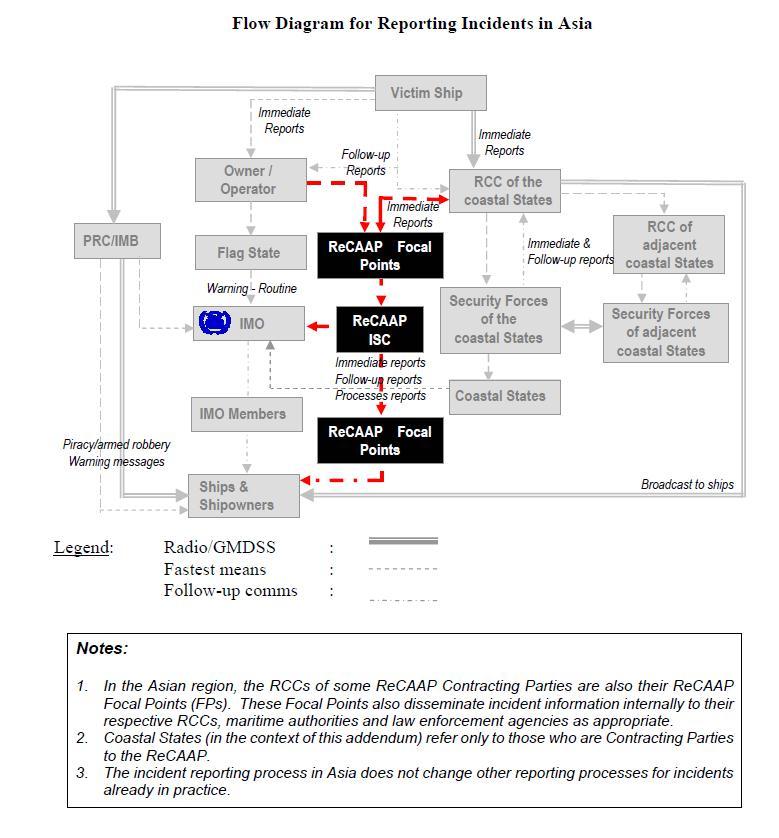 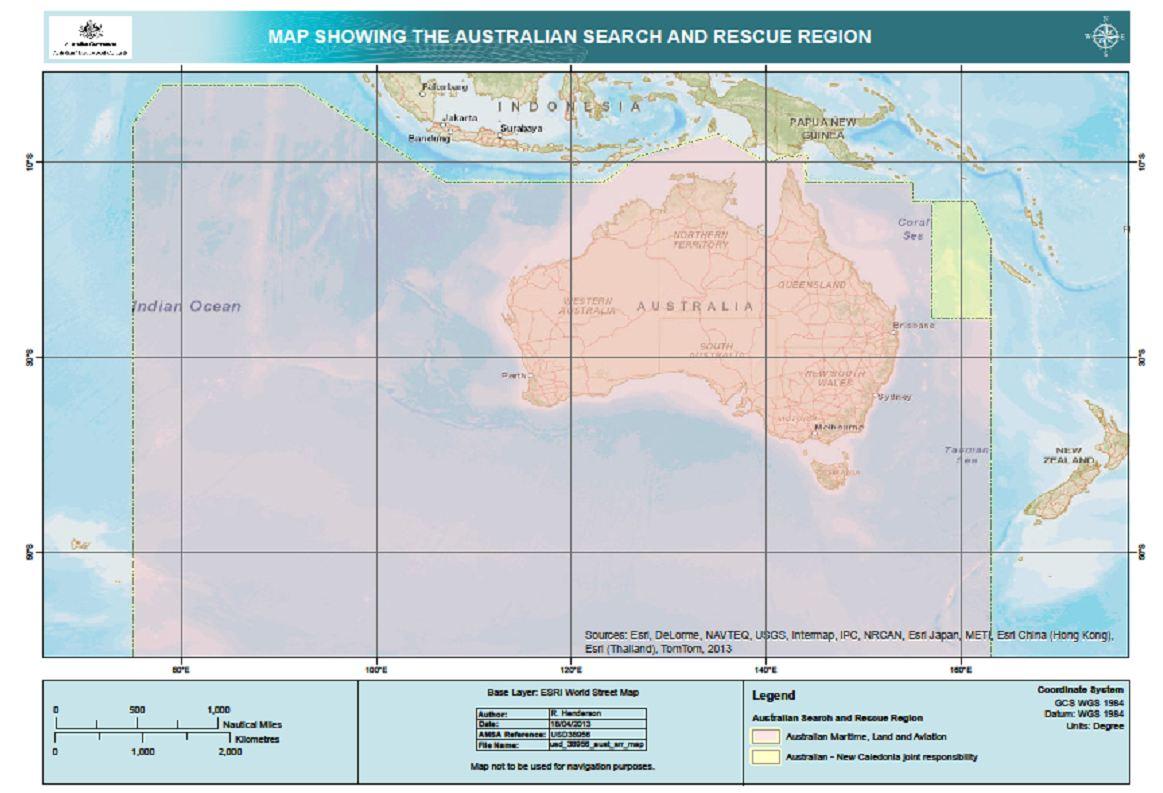