Cruise ships capable of accommodating more than 100 passengers in Sydney Harbour are required to limit emissions of sulphur oxides when berthing.

Cruise ships berthing in Sydney Harbour will be issued with a Direction to use either low sulphur (maximum 0.10% m/m) fuel or an alternative measure that achieves an equivalent outcome.

These Directions have been issued by AMSA since December 2016 in accordance with subsection 246(1)(b) of the Navigation Act 2012.

The issued Directions require changeover to low sulphur fuel or an alternative measure within one hour of arrival and permit changeover back to heavy fuel oil up to one hour prior to departure. We expect and require masters and operators to comply with Directions. The penalties for not complying are substantial.

The Directions aim to reduce exhaust emissions of sulphur oxides and other particulate matter from cruise ships berthed in Sydney Harbour. Visible discharge from a ship’s exhaust stack/s is still possible even when low sulphur fuel or an exhaust gas cleaning system, or scrubber, is being used. In particular, the water used in scrubber systems to remove the bulk of the sulphur and particulate matter produces steam, which is visible from the exhaust stack—as shown by the following photo. 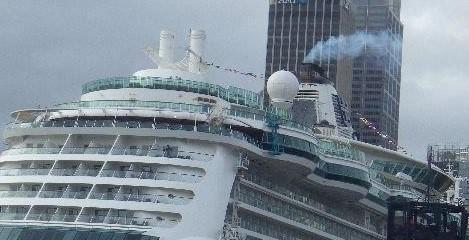 The generation of noise, odour and vibration from cruise ships is not regulated under these Directions or by AMSA. Neither are impacts to visual amenity or planning decisions—such as the location of berths and the use of onshore power. State and Northern Territory Governments retain the responsibility for regulating these aspects of shipping, including the number of ships permitted to berth as well as associated berthing times and duration.

Where exhaust gas cleaning systems are used instead, the system records are inspected. The ship’s fuel management system is also investigated to make sure that the ship is utilising the low sulphur fuel while at berth.