Australia Bay Seafoods General Manager and career fisherman Michael O’Brien, talks to AMSA about how the tragic loss of life with the capsizing of FV Dianne and FV Cassandra prompted them to reinforce their approach to safety.

Six men, all professional divers, died when their commercial bech-de-mer vessel Dianne overturned off the town of 1770 on the evening of 16 October 2017.

One survivor was rescued by a passing yacht the following morning and the alarm was raised. But that was hours after the capsize and by then, Dianne had sunk to the seafloor, carrying with her any hope of rescuing the men trapped inside.

The coroner investigating this tragedy and another involving the death of two men on the capsized prawn trawler Cassandra, highlighted the safety benefits of float-free EPIRBs for commercial fishing operations.

Float-free EPIRBs will be mandatory for certain commercial vessels, including many fishing and dive operations operating domestically in Australia from 1 January 2021.

‘For me personally, it was that if professional divers couldn’t handle that situation underwater, your average fisherman was going to find it a lot more difficult,’ Michael said.

Australia Bay Seafoods is Australia’s largest tropical snapper fishing operation operating out of the Northern Territory in the Gulf of Carpentaria and beyond, close to the maritime border with Indonesia.

Michael described a sense of disbelief and heartbreak among the broader Australian fishing and diving community after Dianne, followed by a realisation that his company had to respond in its own way to the tragedy.

Australia Bay Seafoods installed float-free EPIRBs on all three of their vessels.

‘In a worst-case scenario, being a vessel capsizing, it’s a very difficult thing if you’re stuck inside and you’ve got to go looking for an EPIRB,’ Michael said.

‘We looked at it logically, putting our [float-free] EPIRBs on our masts. Either way the vessel rolls, if that was worst-case scenario, it would be able to float up from the starboard or the port side roll.’ 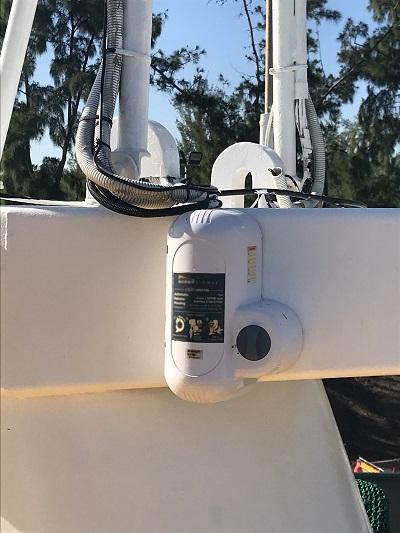 The company also maintains secondary EPIRBs in the wheelhouses of all three boats as an additional safety measure.

But float-free EPIRBs weren’t enough for Michael and after reading through the coroner’s recommendations, made public nearly two years after Dianne, he took further steps to give his crews the best chance of survival if the worst happened at sea.

‘We put in emergency escape lights in all our cabins and all our exit doors within the vessel which switch on automatically once the vessels go through a 60 degree swing. We also took the opportunity to put glow-in-the-dark tape along the bottom of the wall with arrows marking the direction to the exits,’ Michael said.

Michael believes that safety on commercial fishing vessels is an evolutionary process, aided by advances in technology.

The company keeps iPads on all three vessels. Downloaded onto each iPad are SeSafe training modules and an app called Miracle with important documentation for things like near misses, incidents and safety updates. They also use the iPads to share lessons learned among the fleet.

After years of doing training on shore, the company realised it could affect greater change to the safety culture among its crews by running training in the workplace—at sea.

‘Like the rest of the industry we’ve still got a long way to go,’ Michael said, adding that what worked for Australia Bay Seafoods might not work for every operation.

‘You just have to do what works for you, your people and your operation.’