Tropical cyclones typically occur in the northern part of Australia between the start of November until the end of April (cyclone season). These significant weather events pose a serious risk to maritime safety, particularly in the event of an engineering failure at sea in the vicinity of a cyclone.

AMSA has recently observed instances where piloted vessels have navigated close to a tropical cyclone, where the effects of the cyclone on the prevailing wind, waves and sea conditions have made safe navigation difficult.

In one instance an engineering breakdown occurred in close proximity to the cyclone, necessitating the vessel to depart the Inner Route pilotage area and exit the reef. This was particularly challenging given the vessel’s reduced power and sea-keeping ability amidst the prevailing conditions.

AMSA considers these situations to be unnecessary and in the majority of instances, avoidable through appropriate passage planning and risk assessment.

If a voyage is intended when a tropical cyclone is known to exist in, or nearby, a coastal pilotage area, AMSA-licensed coastal pilots are required to plan (and/or delay) the conduct of the voyage, so as to avoid interaction with the cyclone to the extent required to ensure maritime safety prevails at all times.

It is acknowledged that the path of a cyclone can be erratic, and its track may change while a voyage is underway. In any case, coastal pilots are required to monitor the forecast track of the cyclone and adjust the passage plan, in order to avoid interaction with the cyclone and maintain a safe distance as required.

As a minimum, coastal piloted vessels should not proceed within the area depicted by the coloured circles (or the corresponding forecast circles) on a tropical cyclone forecast track map, such as shown in the example below. These areas represent the cyclone’s destructive core and winds which are to be avoided. 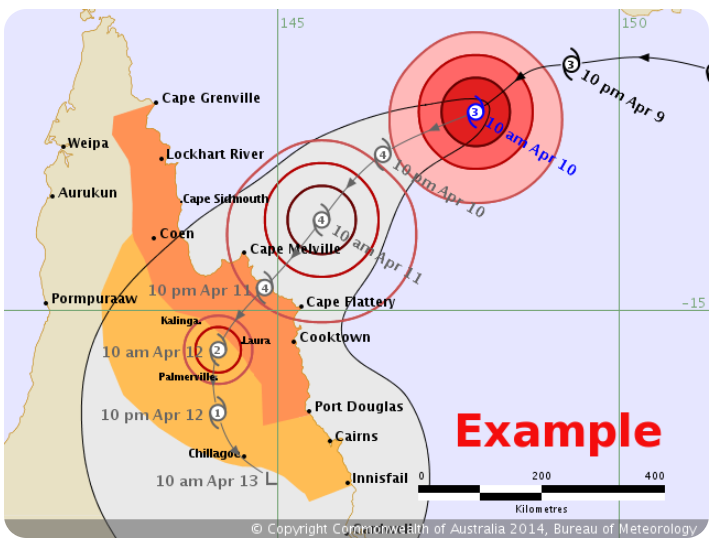 Schedule 3 of Marine Order 54 (Coastal pilotage) indicates if a pilot holds a restricted or unrestricted pilot licence, that the pilot must “give information and advice to the master of the vessel to assist the master and the vessel’s navigating officers to make safe passage through the pilotage area”.

A coastal pilot that deliberately takes a vessel into the path of, or in close proximity to, a tropical cyclone, where it could have otherwise been avoided through appropriate planning and risk assessment, may be found to have breached this particular licence condition.

In such circumstances, AMSA may pursue regulatory action against a pilot accordingly.

Tropical cyclones typically form between 5º and 15º south in the southern hemisphere. The following warning signs may be relevant for an approaching or developing tropical cyclone:

If a coastal piloted vessel finds itself within close proximity to a tropical cyclone due to a significant change in the cyclone’s forecast track, the following information may be useful.

Whilst the movement of a tropical cyclone can be unpredictable and the associated winds irregular, it is possible to identify two key areas of a cyclone, namely the ‘dangerous’ and ‘navigable’ semi-circles. The action required to evade the cyclone is dependent on which semi-circle the vessel is located within.

The safety and avoidance rules described below are for cyclones in the southern hemisphere:

As part of the expected risk assessment process, coastal pilots are required to obtain and monitor information about the likely development, or the existence of, a tropical cyclone which may impact on navigation relevant to a planned voyage in a coastal pilotage area.

Information regarding the possible interaction with a tropical cyclone should be taken into account and the vessel’s passage planned accordingly, to avoid the cyclone and the associated sea conditions to the maximum extent reasonably practicable.

The Outlook contains either a statement that no cyclones are expected to develop in the next three days, or a brief explanation of the weather situation and the probability of tropical cyclone development on each of the following three days.

The Tropical Cyclone Outlook may also contain statements about the probability of a tropical cyclone forming within the next week (over the next seven days, rather than just the next three days) when there are clear signs of an increase in risk over that period.

The Tropical Cyclone Outlook may be updated if there is a significant change in the forecast.

Additional general information about tropical cyclones in Australian waters is also available in these reference books: