MO54 provides that it is a condition of a pilot licence that a pilot must tell the relevant pilotage provider and REEFVTS of any incident involving the vessel being piloted, within a prescribed timeframe.

MO54 also provides that pilotage providers must tell AMSA of any incident involving a vessel piloted or operated by a member of the provider’s pilotage crew, within prescribed timeframes.

MO54 defines pilotage crew (of a pilotage provider) to mean:

a. each pilot contracted or employed by the pilotage provider, including trainee pilots; and

b. each seafarer of each pilot launch operated by the pilotage provider.

MO54 defines an incident to mean:

a. an incident that involves a pilot launch or a vessel piloted by a person contracted or employed by a pilotage provider; and

b. is any of the following:

(i) a marine incident;

(ii) the illness of a person that may affect the safe operation of the vessel;

(iv) machinery or equipment failure on board the launch or vessel that may affect the safe operation of the vessel;

Section 14 of the Navigation Act 2012 defines a marine incident to mean any of the following:

a. a death of, or injury to, a person associated with the operation or navigation of a vessel;

b. the loss or presumed loss of a vessel;

c. a collision of a vessel with another vessel;

d. a collision of a vessel with an object;

e. the grounding, sinking, flooding or capsizing of a vessel;

f. a fire on board a vessel;

g. a loss of stability of a vessel that affects the safety of the vessel;

h. the structural failure of a vessel;

i. a close quarters situation;

j. an event that results in, or could have resulted in:

(i) the death of, or injury to, a person on board a vessel; or

(ii) the loss of a person from a vessel; or

k. the fouling or damaging by a vessel of:

(i) any pipeline or submarine cable; or

(ii) any aid to navigation;

l. an incident that is prescribed by the regulations and involves a vessel.

When to report (pilots)

Clause 2(1)(p) to Schedule 3 of MO54 provides that a pilot must tell the relevant pilotage provider and REEFVTS of any incident involving the vessel being piloted, no later than 2 hours after the incident occurs.

AMSA recommends that if a pilot is in doubt about whether an incident has occurred, that the pilot makes the report in any event.

Note: AMSA may tell a pilotage provider (that employs or contracts a pilot) details of any incident in which the pilot has been involved, in accordance with clause 7(1)(e) to Schedule 3 of MO54.

When to report (pilotage providers)

A pilotage provider must tell AMSA (in writing) of any incident:

a. involving a pilot launch - within 4 hours;

b. involving a vessel piloted by a person contracted or employed by the pilotage provider - within 4 hours

Clauses 13(2) and 13(3) to Schedule 1 of MO54 provide that an incident reported to AMSA or REEFVTS by a pilot (employed or contracted by the pilotage provider) that complies with the timeframes specified above, is taken to be a report by a pilotage provider that also satisfies the provider’s initial reporting requirements to AMSA.

This means if a pilot reports an incident to AMSA (or REEFVTS) which involves a pilot launch or a piloted vessel within 2 hours of the incident’s occurrence, such a report will absolve the pilotage provider of the requirement to also tell AMSA about the same incident in writing within 4 hours.

Note: The provision of a verbal report about an incident to REEFVTS (via VHF radio or telephone) does not prevent a pilot from also submitting a ‘Report of Suspected Non-Compliance with Navigation Act or Safety/Pollution Conventions’ form (SV-HH / AMSA 355) in relation to the incident.

Pilots are strongly encouraged to provide as much information as possible when reporting an incident to REEFVTS and AMSA.

Depending on the circumstances of the case, AMSA may require further information about an incident.

If a request is made by AMSA, a pilotage provider must give AMSA (in writing) more detailed information about the incident within 72 hours of the request being made.

AMSA may request that additional information is provided in a particular form, such as an SV-HH / AMSA 355 form, or some other form.

The provision of an incident report to AMSA by a pilot and/ or a pilotage provider in accordance with MO54 does not absolve the master or owner of a vessel of other reporting obligations which may arise under other Commonwealth laws, including (but not limited) to: 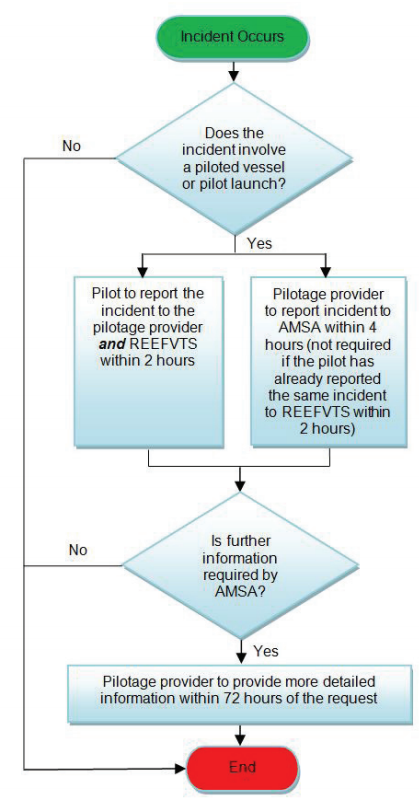 Further information on incident reporting and a link to the SV-HH form online can be found on our website.