We were contacted by a concerned family member regarding the location of the 22 metre ferry Port Princess. The vessel was on a delivery voyage from Victor Harbour, South Australia to Melbourne. We were able to locate the vessel using Automated Identity Ship (AIS) information and we monitored the progress of the vessel.

In the early hours of 16 May the Port Princess issued a distress call after suffering a main engine failure approximately 25 kilometres west south west of Port Macdonnell, South Australia. We issued a broadcast to shipping; a local fishing vessel and three merchant ships diverted to assist. Our Essendon based Challenger and a Royal Australian P8 aircraft were airborne undertaking training flights in the area and were also diverted to assist. The fishing vessel rescued the four person crew from the vessel.

Late in the evening  the Queensland Police advised us that fishing and camping debris had been located on a beach near Cape Keppel, north of Gladstone. They had tasked helicopter Rescue 300 to an extensive coastal sweep and located a suitcase on the shoreline which contained contact details. Phone calls identified the suitcase as belonging to the pilot of helicopter VH-DPU, a Bell Jet ranger that was on a fishing and camping expedition in the Cape Keppel area.

The helicopter had departed Caboolture the previous day and was expected to fly via Keppel Creek for fishing before heading to Raglan for an overnight stay. A flight plan for the aircraft had not been lodged. Coordination for the incident was transferred to us and investigation into flight tracking provided a position at low altitude in the Keppel Creek area.

Rescue 300 was re-tasked for a night vision search and located the crashed helicopter in shallow water at Keppel Creek. Two survivors were found onshore nearby with significant injuries. They were stabilised on the beach and then evacuated by helicopter to Rockhampton.

We received detections of a distress beacon registered to the South African sailing vessel Jedi. The alert was located in the Southern Ocean, approximately 770 nautical miles South West of Cape Leeuwin, Western Australia. Maritime Rescue Coordination Centre (MRCC) Cape Town confirmed there were three people on board the vessel on a passage from South Africa to New Zealand. The vessel had reported a dismasting around the same time the beacon was activated.

The Perth based AMSA Challenger aircraft, was tasked overnight and located the vessel adrift. The crew advised that they were unable to sail or motor the vessel to Australia and requested rescue.

The Royal Australian Navy vessel HMAS Parramatta was tasked to conduct the rescue of the crew. The following morning the AMSA Challenger aircraft returned to the distress location and successfully dropped communications equipment including a satellite telephone to the stricken vessel. HMAS Parramatta arrived on-scene late in the afternoon Saturday 18 March and its helicopter conducted a successful winch recovery of the three crew. 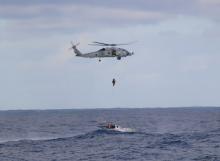 The PV Norwegian Star contacted us advising they had suffered a complete propulsion failure and were drifting. The vessel was carrying 3130 passengers and crew. Despite losing propulsion there was no interruption to the power supply for essential and hospitality services including anchors and bow thrusters on board the ship.

The tug Hastings was deployed to assist. On arrival, the tug secured a tow line to the Norwegian Star and commenced towing the vessel back to Port Phillip Bay. With the help of tugboats Tom Tough and Marysville, the PV Norwegian Star successfully made fast alongside the eastern quay of the Station Pier on 11 February. 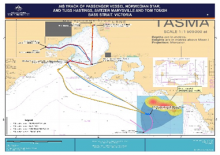 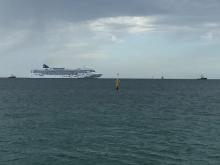 A Robinson R44 helicopter with four people on board made an emergency landing in the Royal National Park near Sydney. We established contact with the pilot who advised that everyone was safe and uninjured but they couldn’t get through heavy terrain at the crash site and needed assistance.

We tasked helicopter LIFESAVER 21 to the scene and NSW Police to assist with a ground response. All four people were safely recovered by LIFESAVER 21 and transferred to the ground party staging point for medical checks and safe transport from the National Park. 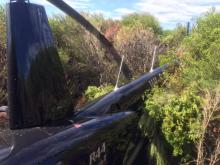 In the early morning we detected a distress beacon registered to the fishing vessel Seabring that was 9 kilometeres due east of Fraser Island, Queensland. A broadcast to shipping was issued and the FV Eylandter II and Suarini responded. They recovered two crew members from a life raft but could not locate the the master of the crew who had last be seen in the wheelhouse of the vessel.

Medical experts advised there was no chance of survival past the afternoon of Wednesday 9 November, and incident coordination was passed on to Hervey Bay Water Police. 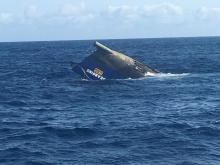 A distress beacon registered to a light aircraft was detected in the vicinity of Lake Frome, South Australia. We tasked a local fixed wing aircraft from Arkaroola and a helicopter from Rawnsley Park along with a local station owner, who agreed to respond by vehicle.
The aircraft was located overturned on the salt lake with two people sitting beside the wreckage. The pilot reported that he had conducted a forced landing. The two occupants were evacuated by local helicopter to Arkaroola for medical assessment. 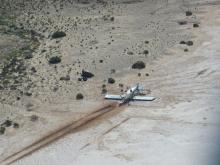 Two distress beacons were detected from the superyacht Masteka 2. We made contact and were advised that enroute to Sydney from Noumea with six crew on board they had suffered rear compartment flooding and steering failure. We diverted the cruise ships Pacific Pearl and Carnival Spirit to the scene. On arrival the Carnival Spirit delivered fuel and transferred two crew from the superyacht. Our Brisbane Dornier Rescue 471 was also tasked and dropped two dewatering pumps and a satellite phone to the Masteka 2.

After stabilising the water intake into the vessel, Rescue 471 and Carnival Spirit were released. We continued to monitor the situation on board the Masteka 2, and on 5 October another two pumps were dropped to the vessel. The tug Molly Grace arrived later that evening and began towing the Masteka 2 to Sydney. Both vessels arrived safely in Sydney on 9 October 2016.

The Master and ship's doctor of the P&O cruise ship Pacific Jewel contacted us to request a medical evacuation of two passengers. A 6 year old boy and his 8 year old sister were suffering from pneumonia and toxic shock. At the time the ship was 400 nautical miles Northeast of Mackay, Queensland. We tasked our Brisbane based Dornier and the Cairns based rescue helicopter to airlift the children and their mother from the ship and take them to Cairns Base Hospital.

In Leigh Creek South Australia a number of aircrafts reported to us that they were hearing a distress signal in the area. We also detected a satellite in the same area.

The beacon was registered to a helicopter. The helicopter's emergency contact details confirmed that they were working in Leigh Creek and had three people on board. The helicopter also sent an SOS message on their onboard tracking system.

RESCUE 51 from Adelaide and a local helicopter from Rawnsley Park Station were tasked to the area while South Australia Police coordinated a local ground response.

The helicopter was located and the pilot advised that the helicopter had suffered engine failure at low level and crashed. The three occupants suffered non-life threatening injuries and were transported to Adelaide for medical treatment.