Dynamic separation can cause your vessel to become unbalanced and tip over. Find out how you can avoid this happening.

In January 2015, a Bahamas-flagged bulk carrier called the Bulk Jupiter sank off the coast of Vietnam with a cargo of 46,000 tonnes of bauxite and a crew of 19 men. Only one survived the tragic incident, which was thought to have been the result of classic cargo liquefaction.

Based on research conducted by the Global Bauxite Working Group (GBWG) and endorsed by the fourth session of the International Maritime Organisation’s Sub-Committee on Carriage of Cargoes and Containers (CCC-4), it is probable that a different phenomenon dubbed ‘dynamic separation’ was responsible for this tragedy.

What is dynamic separation?

Dynamic separation occurs during a voyage where the moisture in the cargo migrates to the surface of a hold as the cargo compacts from underneath due to vibration and vessel movement. This occurs when the cargo contains enough small particles that stop the moisture draining from the cargo.

As a slurry of water and fine particles collects on the top of the cargo it creates a free surface effect in the hold. Over time, the sloshing motion of the slurry can deposit loose cargo unevenly in the hold. The research also shows that different wave periods of the slurry in different holds results in the ship having a peculiar motion rather than a regular roll period in a seaway.

Modelling shows that over time, cargo collects on one side of the holds. As this occurs in adjacent holds, the ship’s weight distribution and stability become affected. The result in more extreme circumstances is the ship progressively listing to one side. As this list increases, so does the action of the free surface water, potentially undermining the surface of the cargo, resulting in a shift and capsize. 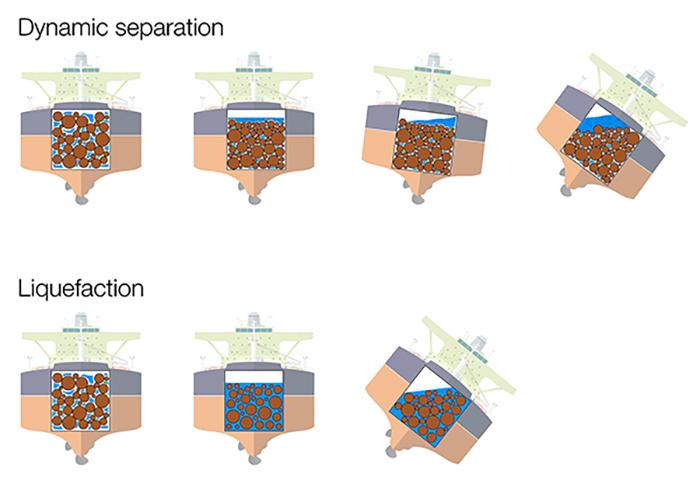 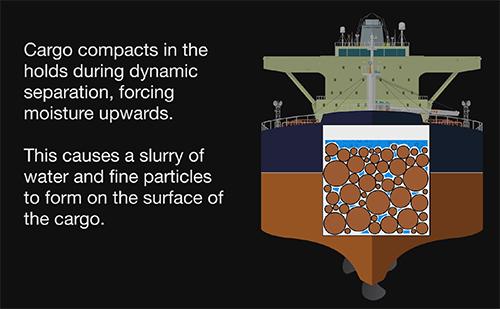 Based on the GBWG research into the behaviour of bauxite, bauxite fines was agreed to be a Group A cargo. A new schedule was introduced into the IMSBC Code for bauxite fines that includes the risk of dynamic separation if the cargo is shipped with a moisture content in excess of its transportable moisture limit (TML).

The existing Group C—no known risks—schedule for bauxite was amended to reflect when the Group A schedule is to be used for shipping a bauxite cargo.

A new test procedure was also added to determine the transportable moisture limit of bauxite.