These are the deficiencies for MARPOL that our inspectors have found.

The OWS is designed with two main elements:

An operational OWS is the evidence that we require to be reasonably certain that the ship complies with MARPOL.

The permitted level for oil discharge is generally 15 parts per million oil in water—a concentration at which oil is not normally visible. If permitted oil content levels are exceeded, an alarm is triggered and the discharge is shut down.

When checking OWS regularly and before an AMSA inspection, make sure to check:

If any of these are found to be deficient or your oil record book is not accurately filled out, your ship may be detained.

If clear grounds exist, our inspector may also ask for a section of piping after the monitor be removed for internal inspection. 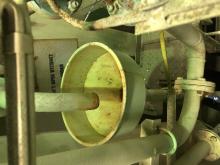 If a vessel is fitted with a STP it should be operational, but may not be in operation if the vessel is directing sewage to a designated sewage holding tank.

Our surveyors regularly find that the STP is not being operated correctly, often being turned on just before entering Australian waters and the plants that use bacteria to process the sewage do not have enough time to produce bacteria. Our inspectors have found internal chambers to be severely wasted, or valves incorrectly positioned so that raw sewage may be inadvertently discharged overboard.

When checking the STP regularly and before an inspection, make sure to check:

If any of these are found to be deficient, your ship may be detained.