The purpose of this notice is to remind vessel owners, operators and masters of:

AMSA encourages ship owners and masters to familiarise themselves with the approved cargo securing manual for their vessel and Marine Order 42, which gives effect to Chapter VI of SOLAS in Australia.

Container losses cause significant harm to the environment, damage to ships and pose a danger to crew. AMSA’s recent focused inspection campaign on proper stowage and securing of cargo containers found ships that: 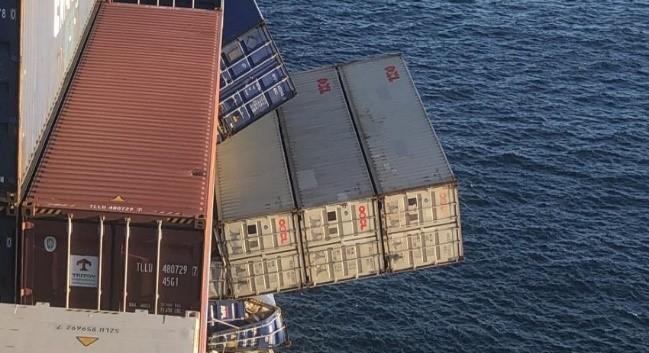 Collapsed containers on board a ship off the Australian coastline

Regulation 5.1 of Chapter VI of SOLAS stipulates cargo shall be loaded, stowed and secured to prevent damage or hazard to the ship, persons and loss of cargo overboard. Regulation 5 is given effect in section 14 of Marine Order 42.

Cargo shall be carried in accordance with the Code of Safe Practice for Cargo Stowage and Securing (CSS Code). The CSS Code General Principles state:

“Decisions taken for measures of stowage and securing cargo should be based on the most severe weather conditions which may be expected by experience for the intended voyage.”

Severe weather conditions may be experienced at any time of the year off the Australian coast and cargo should be stowed and secured accordingly.

The majority of recent container loss incidents in Australian waters have occurred during an East Coast Low event.

The effects of East Coast Lows

East Coast Lows are intense low-pressure weather systems that occur off the east coast of Australia. These systems are also referred to as complex lows or Tasman lows.

Strong southerly winds, when combined with an easterly swell, can create extreme wave conditions where container ships are at risk of losing cargo overboard. In such incidents, swell size and interval may lead to excessive or even parametric rolling resulting in extreme acceleration forces on container stacks.

Guidance for avoidance of parametric rolling is provided in MSC.1/Circ.1228 Revised guidance to the master for avoiding dangerous situations in adverse weather and sea conditions.

Chapter 6.3 of the CSS states:

“One way of reducing excessive accelerations is for the master, as far as possible and practicable, to plan the voyage of the ship carefully so as to avoid areas with severe weather and sea conditions. The master should always consult the latest available weather information.”

Cargo containers shall be stowed and secured in accordance with the approved Cargo Securing Manual as required by Regulation 5.6 of Chapter VI of SOLAS.

Masters and deck officers must be familiar with the contents of the Cargo Securing Manual including container securing requirements, maximum container stack masses and permissible vertical sequences of masses within container stacks.

Exceeding the mass limits defined in the Cargo Securing Manual may result in the destruction of lashings and fittings or the collapse of individual containers due to excessive acceleration forces in heavy weather.

Maintenance of securing devices and arrangements

“The Company should establish procedures to ensure that the ship is maintained in conformity with the provisions of the relevant rules and regulations...”     and

“The Company should identify equipment and technical systems the sudden operational failure of which may result in hazardous situations. The SMS should provide for specific measures aimed at promoting the reliability of such equipment or systems.”

AMSA has recently found instances of twistlocks designed for vertical layering between containers used as base locks even though they were colour coded (Base locks have a larger seat to eliminate lifting forces).

Use of the wrong securing equipment at the base could result in collapse of the entire stack in heavy weather. 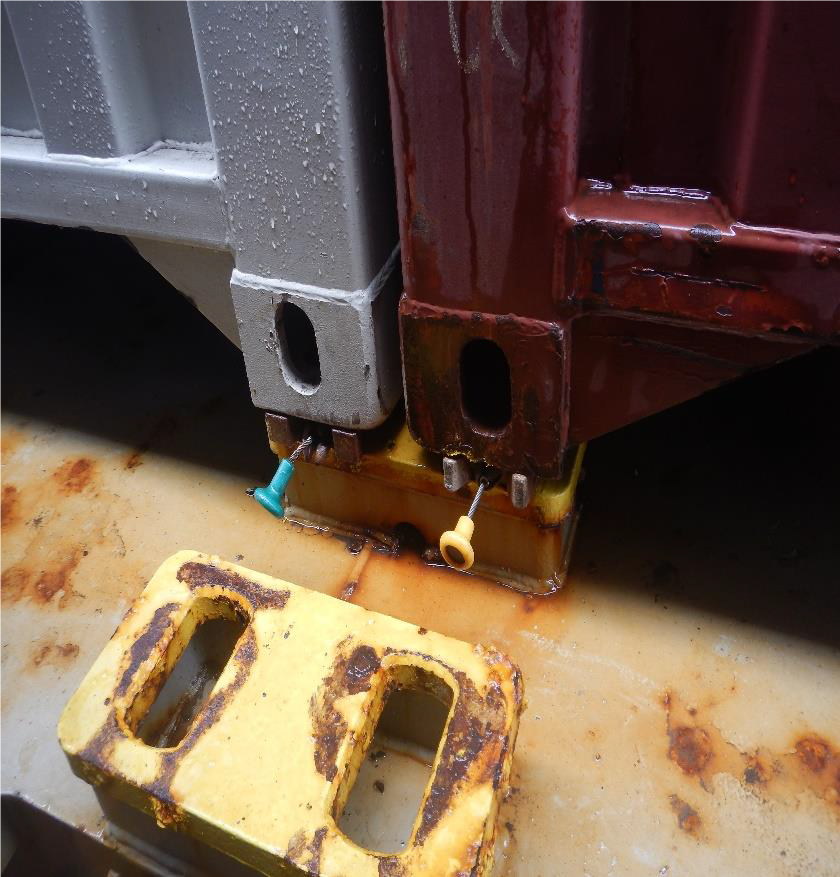 Mixed locks at base of stack

On other occasions, AMSA inspectors have found loose or insufficient lashing arrangements. SOLAS requires cargo to be secured ‘throughout the voyage’ to prevent loss of cargo overboard.

The Cargo Securing Manual specifies the types and correct application of cargo securing devices provided on board the ship. The master is ultimately responsible for verifying securing arrangements and should ensure that officers delegated to carry out this important task are fully aware of the contents of the Cargo Securing Manual.

It should be noted that overtightening can cause damage to lashing points and lashing rods.

Australia expects cargo to be carried in full compliance with the vessel’s approved Cargo Securing Manual and in accordance with the requirements of the SOLAS Convention.

Due to the risk to Australia’s marine environment AMSA will continue to direct additional focus on container stowage and securing arrangements during forthcoming port State control (PSC) inspections in Australia.

If, during a PSC inspection, evidence is found that:

AMSA will take the necessary steps to bring the ship into compliance.