Following a report to AMSA, and subsequent investigation, the Pax Phoenix was fined for illegally discharging oily water into the marine environment near Holbourne Island, Queensland on 2 September 2001.

At approximately 9.45 pm offshore Holbourne Island in the Whitsunday Islands Group, another ship in the area was overtaken by the Pax Phoenix. Under the light of a full moon one of the officers on the other ship saw a sheen on the water visible over the previous quarter to half a nautical mile. It appeared to be an oil slick leading directly to the stern of the Pax Phoenix. The oil slick was described as 60 to 80 metres wide.

As the other ship continued on its route it noted the slick was visible until about 12.45 am on 3 September 2001, extending for a length of approximately 42.5 nautical miles (79 km).

The incident was subsequently reported to AMSA.

Investigations commenced and an aircraft was deployed to fly over the area. It confirmed an oil slick approximately 43 nautical miles in length offshore from Bowen and Abbott Point, to the east of Holbourne Island. A Queensland Transport vessel collected samples from the spill.

Authorities identified seven ships which were in the vicinity of the reported oil spill and arrangements were made to take samples from each of these ships, including the Pax Phoenix. On 3 September 2001 when investigators were obtaining samples from the Pax Phoenix, the master and some crew members denied any knowledge of pumping oil overboard. An inspection showed no visible signs of the release of oil on the hull, on the deck or in the engine room.

Subsequent scientific tests of the spilled oil and oil samples from each of the seven ships which were in the vicinity were analysed. Analysis determined that the Pax Phoenix was the source of the oil spill. This testing also eliminated all the other ships as potential polluters.

The slick was monitored by:

It eventually dispersed naturally out to sea. 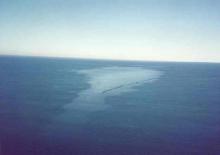 Part of the oil slick from the Pax Phoenix

On being advised of the impending legal action in Australia, the owners, Sanzo Enterprize (Panama), engaged a consultant to undertake an extensive investigation. The results of that investigation were provided to the Director of Public Prosecutions in Australia.

The conclusion of that investigation was that a quantity of oil contained in either a bilge tank or a sludge tank had been consciously pumped overboard on 2 September 2001. The investigation report concluded that an illegal discharge was undertaken by junior engineering crew when faced with an oil overflow due to an operational error within the engine room. They constructed a temporary modification, a bypass hose, so that waste oil could be directly pumped into the sea instead of going through the oily water separator equipment. The crew members involved also made significant efforts to cover up the illegal discharge by cleaning the area, removing the bypass hose and painting over the piping valve connections which could have indicated that the system had been tampered with.

The available evidence precluded an accurate estimate of the volume of oil actually discharged. The length of the spill was reported to be 42-43 nautical miles (79 km) long and around 30 metres wide.

Based on these observations and the colour of the slick, investigators considered that a conservative estimate of the oil volume in the slick was likely to have been between 167 and 666 litres.

As the Crown had not been able to obtain evidence of a deliberate discharge by a person, only being made aware of the deliberate action due to the owner’s investigation, charges for strict liability offences were laid upon the master and the owner.

On 1 October 2004 in the Cairns District Court, the master pleaded guilty to an offence against section 9(1) of the Protection of the Sea (Prevention of Pollution from Ships) Act 1983 in that between 1 September 2001 and 4 September 2001 in the waters off Bowen, the ship Pax Phoenix discharged an oily mixture into the sea.

On 5 October 2004 the corporation Sanzo Enterprise (Panama) S.A. pleaded guilty to an offence against the same section.

The court took into account the following mitigating circumstances:

On 6 October 2004 before His Honour Judge Shanahan in the Cairns District Court, the defendant Sanzo Enterprises (Panama) S.A. was convicted as charged and fined the sum of $85,000.

The court was satisfied that the master qualified for an order under section 19B of the Crimes Act 1914 (Cth). In these circumstances, where a person is charged with a Commonwealth offence and the court is satisfied that the charge is proved, but is of the opinion, having regard to various factors, that recording a conviction is not warranted, the court may discharge the person without penalty.