At 8.55 am on 10 September 1979, the tanker World Encouragement was conducting berthing operations at an Australian Oil Refinery (AOR) mooring at Kurnell in Botany Bay, New South Wales, when oil began rising to the water surface from beneath the ship.

It was initially thought the ship had disturbed oil in the sediments, but soon oil was gushing to the surface from a hole in the ship's hull. It was necessary to complete the berthing to allow enough draft so that oil could be transferred from the ruptured tank into the central slop tank.

Although the ship's Master acted as swiftly as possible to transfer the oil and create a water seal in the tank, approximately 95 tonnes of Arabian Crude oil escaped into the waters of Botany Bay.

The World Encouragement was Liberian-flagged, and owned by Liberian Cross Transports Incorporated. The vessel was:

It was laden with Arabian Crude oil loaded in Saudi Arabia before sailing directly to Botany Bay. The Master was being assisted by NSW Maritime Services Board (MSB) pilots and tugs when the incident occurred.

By 9.20am, AOR had declared a red alert and deployed resources to contain the spill. The National Plan was activated by the NSW State Committee.

Despite several committee members being unavailable, within seven hours the MSB and other organisations had mobilised:

Dispersant holdings were also mobilised. Equipment from both the National Plan stockpile at Port Botany and the AOR facility was used.

The ship was surrounded by oil containment booms by 12.15 pm, but oil had formed a slick with a 3.5 km front. The weather deteriorated in the evening. Gale force winds combined with a high tide breached containment areas, allowing oil to move into the environmentally sensitive Quibray and Weeney Bays. 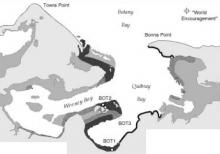 Extent of oiling in Botany Bay and adjacent bays

Mangroves were present at Towra Point, Quibray Bay and Weeney Bay, with oyster leases in Quibray Bay. Specific instructions were given to avoid spraying these areas with dispersant. The mangroves presented the greatest challenge to clean up.

Minimal success was achieved by booming, skimming both at low and high tides, saltwater washing with several pumps and then a single pump, and the use of straw as a sorbent. Booming and washing with a single pump proved the best of these methods because of the relatively low trampling involved. Quibray Bay was particularly difficult to clean as there was limited access, no beach and many immature trees. The shallow water presented difficulties in laying booms.

Around 100 ha of mangroves were oiled and 4.4 ha killed as a result of the World Encouragement spill. Regrowth has since occurred over much of the deforested area.

Dispersant was used in open areas of Botany Bay and between the heads and was reasonably successful on the second and third days of the clean up. A total of 2700 L of Corexit 9527 concentrate, and 9600 L of BP-AB and diluted Corexit 8667 was used. The dispersants were applied from AOR vessels as suitable aircraft were not available; however, the helicopter was used to survey the effectiveness of applications.

Oil came ashore on Silver Beach adjacent to the refinery. The series of groynes along the beach proved very useful in containing oil over successive tides, although the construction rocks became contaminated and continued to cause minor pollution for some time. A trench was dug at the high tide mark and oil was squeegeed into it to enable collection by pump or, when oil weathering made pump use impossible, by manual means. Contaminated sand was completely removed from the beach. Black lines represent moderate oiling, and dark grey shaded areas are mangroves, shaded cross-hatched areas are slightly oiled, black lines represent oiled shoreline and thick black bands are moderate to heavy oiling in mangrove areas. Source: Duke & Burns (1999).

The NSW National Parks and Wildlife Service and Taronga Zoo arranged the transport and cleaning of oiled birds. 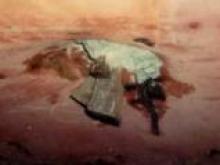 Around 50 birds were captured, cleaned and then released. Three captured birds subsequently died, and some oiled birds eluded capture so their fate was unknown.

After three days the response was wound down, response crews having removed or dispersed the bulk of the oil. The hole in the ship's hull was filled temporarily with wood plugs and cement to enable the World Encouragement to sail to Singapore for proper survey and repairs.

Many detailed interviews were undertaken. Those interviewed included the master of the World Encouragement, the pilots, the tug masters, and the harbourmaster. Inspection of the hull by divers in Botany Bay and subsequent dry-dock survey in Singapore showed a hole approximately 375 mm x 200 mm in No. 3 Cargo Tank (Figure 4).

Investigations in Botany Bay concluded it was likely the ship had been holed by the shank of the starboard anchor which failed to fall properly. The survey in Singapore reported that the hole and adjacent scuff marks did not appear to be the right shape to have been caused by the anchor given the reported movements of the ship. The starboard anchor was photographed and examined as it was raised prior to departure from Botany Bay. The shank had flecks of red paint adhered to it. Samples of this paint were analysed and found to be an antifoulant, lending weight to the theory that the anchor had pierced the ship's hull.

Hole in the hull of the World Encouragement

When inspected in Singapore, however, the paint was not found on the anchor, the evidence apparently having been destroyed en route to Singapore. The approaches to the berth were thoroughly surveyed by side-scanning radar. The only objects found were old piles but these were below the depth that would have presented an obstruction to the ship. The piles were nonetheless removed and inspected but they were thoroughly encrusted with marine life and showed no evidence of having been scraped by the ship's hull.

No charges were laid against the ship's master as it was agreed he could not have foreseen or avoided what was officially described in MSB press releases as a 'freak accident'.

The Supreme Court of New South Wales found the Maritime Services Board was entitled to recover expenses and liabilities totaling $209,557 from the World Encouragement's owners, Liberian Cross Transports Incorporated. This amount covered costs incurred by MSB during the response (eg equipment hire and contractor fees), as well the labour of permanent MSB staff and the use of MSB-owned equipment.