For vessels in distress or in need of assistance there can be, at times, a need to find an appropriate ‘place of refuge’, where steps can be taken to stabilise or repair the vessel and prevent the situation from worsening.

The Commonwealth and State and Northern Territory governments have, in cooperation with industry, developed the National Maritime places of refuge risk assessment guidance, to inform and expedite decisions on requests for a place of refuge. The guidance provides for a nationally consistent approach, and is designed to ensure that there is adequate and timely consultation between relevant stakeholders and that all risks are identified and, where practical, addressed.

A place of refuge is a place where a ship in need of assistance can take action to enable it to stabilise its condition and reduce hazards to navigation, and to protect human life and the environment.

Australia maintains the right to regulate entry into its ports and to protect its coastline and marine resources from pollution. While there is no international requirement for a country to provide a place of refuge, there is an established humanitarian right for a ship in distress to seek such refuge, and an obligation to render assistance to a ship in distress under, for example, the Search and Rescue Convention. The decision whether to provide a place of refuge for a vessel in need of assistance is, therefore, a balance between national interests and the needs of the vessel.

Authority to grant a place of refuge

A place of refuge request for a vessel located in any other waters, including waters beyond coastal waters within Australia’s Exclusive Economic Zone (EEZ), waters of the external territories and, in some cases, on the high seas, should be considered by AMSA.

However, the guidance recognises that, under the Protection of the Sea (Powers of Intervention) Act 1981, AMSA’s Maritime Emergency Response Commander, or MERCOM, has the authority to take any action deemed necessary with regard to maritime incidents that have or may result in pollution, including assessing place of refuge requests in internal or coastal waters. The MERCOM must consider the reasonable views and stated positions of the relevant State and Northern Territory governments and other stakeholders, which will represent views about economic, environmental, community and social interests that could be impacted. As stated in the guidance, the MERCOM’s decisions regarding a request for a place of refuge will be expeditiously communicated to all relevant stakeholder groups and be fully documented.

Deciding whether to grant a place of refuge

The guidance sets out the decision-making process for requests for a place of refuge (see also the flowchart). The guidance is flexible, to take into account the wide variety of potential circumstances, and allows for case-by-case consideration of requests.

The guidance provides all of the following:

The guidance also recognises that coordination of a place of refuge request may need to be passed to another State/Territory or Commonwealth jurisdiction and sets out the considerations for a formal handover of responsibility.

The guidance builds on existing arrangements and relationships between Commonwealth and State/Northern Territory maritime response agencies and industry, established under the National Plan for Maritime Environmental Emergencies.

All place of refuge requests should, so far as practically possible, be made through AMSA’s Rescue Coordination Centre (JRCC Australia), Australia’s ‘Maritime Assistance Service’ for the purposes of IMO Resolutions A.949(23) and A.950(23). 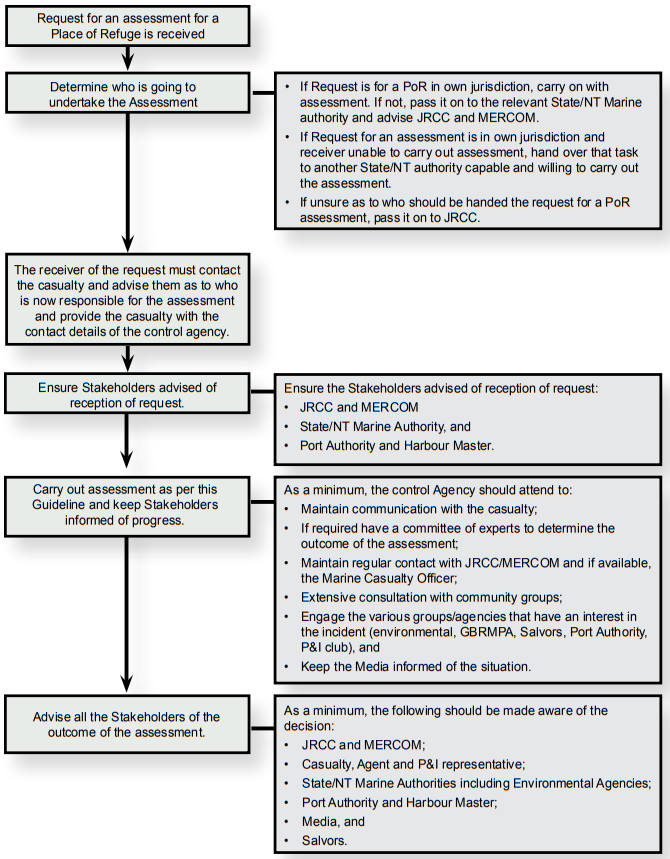 1. With the exception of domestic or foreign warships, for which the Royal Australian Navy is responsible for determining Australia’s response.