DCV Safety Alert: 1/2021 aims to raise awareness of recommendations made by the United States, National Transportation Safety Board, following the investigation into the fire and subsequent loss of the passenger vessel Conception.

While this incident did not occur in Australia, the findings of the National Transportation Safety Board (NTSB) investigation provides our industry with an opportunity to learn from the unfortunate experience of others.

Conception was a 22.8 metre United States flagged passenger vessel that caught fire in the early hours of 2 September 2019. Of the 39 people on board, 34 perished in the incident.

When the fire broke out, the vessel was at anchor off Santa Cruz Island, California.

A crew member sleeping in an upper deck berth was awakened by a noise and got up to investigate. Upon seeing a glow outside, he realised that fire was rising up from the saloon compartment directly below, and he immediately alerted the other four crew members sleeping on the upper deck. The master was able to send a distress message to the Coast Guard.

The crew members attempted to access the saloon to assist the passengers and the other crewmember in the bunkroom below the main deck, but access was blocked by fire and thick smoke.

The Coast Guard and other first responder vessels began arriving on scene within 90 minutes but, despite firefighting and search and rescue efforts, the vessel burned to the waterline and sank just after daybreak. 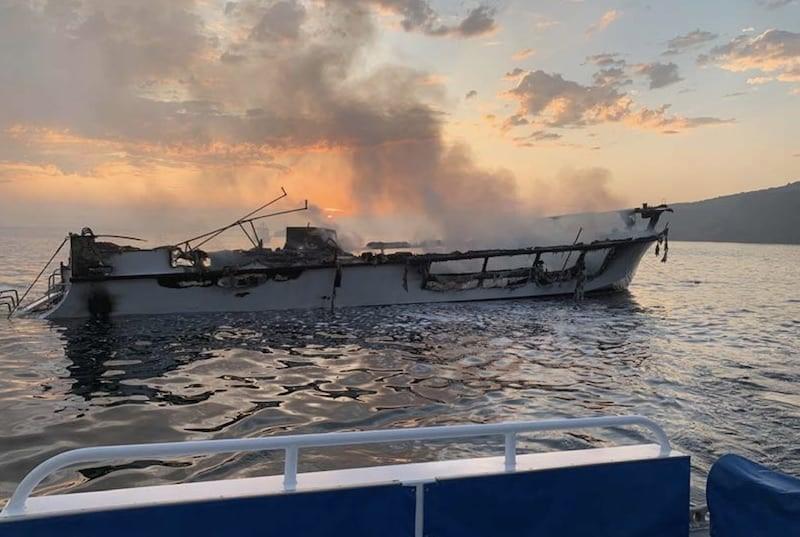 The NTSB report drew 18 conclusions, the following of which are considered worthy of note by those persons involved in operating passenger vessels in Australia:

While the NTSB investigation did not determine the cause of the fire, the analysis section of the report included the following text which is worth noting.

Since the salon compartment was a critical element in the egress pathway from the passenger bunkroom, prudent fire safety planning would suggest that risky activities (unattended charging of batteries) and materials, such as the plastic chairs and polyethylene trash cans that could contribute to a fire should have been minimized in this area. This was not the case on the Conception.

Crew statements, as well as statements from previous passengers, indicated that the overnight, unattended charging of a large number of batteries was a normal practice in the salon compartment and was a risk that had not been considered. Each device and battery represented a separate potential source of ignition.

The passengers on the Conception were recreational divers, so in addition to common types of electronic items, such as phones, tablets, digital cameras, and laptops, divers also used underwater cameras, flashes, strobes, and flashlights.

AMSA will consider the NTSB report in full when reviewing the current regulatory requirements for domestic commercial vessels, including the standards for fire safety and accommodation and arrangement.