What is Modern Slavery?

The term modern slavery is used to describe situations where coercion, threats or deception are used to exploit victims and undermine or deprive them of their freedom.

The Australian Government estimates that there are approximately 1500 victims of modern slavery in Australia at any time. The United Nations estimates that at least 40 million people around the globe are in modern-day slavery. Those most at risk include women and children who may have little or no capacity to protect themselves.

Australia has agreed with the United Nations to attempt to abolish modern slavery by 2030.

There are eight types of serious exploitation which combined make up modern slavery:

Freedom from slavery is a fundamental human right. Under the he Australian Government endorsed United Nations Guiding Principles on Business and Human Rights (UN Guiding Principles), entities have a responsibility to respect human rights in their operations and supply chains. This responsibility includes taking action to prevent, mitigate and, where appropriate, remedy modern slavery in your entity’s operations and supply chains.

Other illegal and harmful practices may be present within the supply chain, but are not considered modern slavery. Practices like substandard working conditions or underpayment of workers may be indicators of more serious exploitation, corruption and practices which impact on human rights.

The Australian Government’s Modern Slavery Act 2018 (the Act) came into force on 1 January 2019. The Act establishes a mandatory reporting regime for entities:

The Act requires reporting of an Annual Modern Slavery Statement (the Statement). The Statement must identify and address the risks of modern slavery in AMSA’s global and domestic operations and supply chains, and actions taken to address those risks.

There are seven mandatory criteria that AMSA is required to address in the Statement:

The first Australian Government Modern Slavery Statement covers the 2019-20 Australian financial year (reporting period). Statements from entities were originally due to be published before 31 December 2020, however, because of COVID-19 the first reporting period has been extended to 31 March 2021.

Statements are to be provided to the Modern Slavery Business Engagement unit; Australian Border Force, Department of Home Affairs. Entities who fail to comply with the reporting requirements will be publicly named and may be subject to remedial action to ensure future compliance.

The Modern Slavery Business Engagement Unit expects entities to use a continuous improvement approach in implementing the requirements, and to see demonstrable improvements in the quality of information and the understanding of modern slavery over time.

It is unlikely that AMSA’s current known and immediate supply chain has risks which meet the threshold for serious exploitation as defined by the Modern Slavery Act 2018.

AMSA uses the Department of Home Affair’s Cause, Contribute and Linked (CCL) model to limit the risk of modern slavery in our supply chains. Using the model helps AMSA understand and focus on those items we directly control or contribute to, as opposed to those items where we have less control. 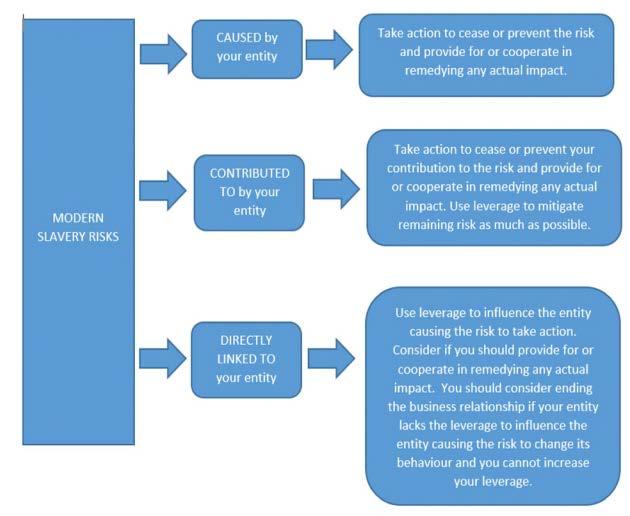 Appendix 1 describes a list of modern slavery indicators which can be used to identify the risks represented by our major suppliers, including:

The result of assessing the indicators and applying the CCL model is a risk and control table—which will be added to as AMSA continually improves its awareness and understanding of the risks of modern slavery.

AMSA has a range of generic controls to ensure that, where possible, our suppliers do not increase or contribute to the risk of modern slavery. These controls include:

As detailed in the Department of Home Affairs ‘Addressing Modern Slavery in Government Supply Chains Toolkit’, AMSA will develop a simple risk screening tool to be used in procurement activities to improve identification of potential modern slavery risks, and to identify potential high risk procurements.

This tool will be added to the existing “Initial Contract Risk Assessment” checklist that is completed as part of all approaches to market.

The additions to the “Initial Contract Risk Assessment” will consider the overall risks of modern slavery as follows:

Identify the broad operations and overall supply chain structure of the procurement/contract through a broad mapping exercise to identify:

Use the matrix below to help identify modern slavery risks across the categories of:

Where risks are identified, further investigation will be undertaken in conjunction with the Risk and Compliance team.

Where significant modern slavery risks are identified at the ‘Initial Contract Risk Assessment’ additional safeguards will be integrated into tender processes and documentation.

Significant risks will be mitigated as far as possible through the procurement process:

The Procurement Evaluation Plan will be tailored to include evaluation criteria that assess the supplier’s proposed approach to addressing modern slavery risks when evaluating and assessing their tender submission (including responses to the supplier questionnaire where used).

The evaluation process will include assessment of:

Procurement officers will consider including specific clauses that guard against modern slavery risks in contracts with suppliers. The Commonwealth ClauseBank includes predrafted contract terms that can be added to existing AMSA contract when appropriate. These clauses are incorporated without change in order to preserve the legal integrity of the contract terms.

4. Contract management:
Contract managers will work in collaboration with suppliers to incorporate measures safeguarding against potential modern slavery risks and monitor progress, and will implement action plans to mitigate the risks identified.

AMSA will assess any requirement for drafting new clauses for approaches to market and contract documentation to ensure supplier’s obligations with regard to modern slavery are captured. AMSA will consider the inclusion of key performance indicators in high risk contracts on a case-by-case basis.

Where appropriate AMSA will also work collaboratively with suppliers to raise the awareness of modern slavery risks in their operations and supply chains. AMSA will clearly communicate its expectations to suppliers including how to identify, address and report modern slavery issues.

Where a risk of modern slavery is identified AMSA will continue to provide education to staff on any potential risks/impacts and possible controls. This may include closer due diligence of suppliers, any subcontractors and major suppliers.

AMSA will continue to monitor modern slavery issues and their potential impact and consider the possible inclusion of relevant clauses in AMSA contracts as appropriate.

This report was presented to meeting 152 of the AMSA Board Audit, Risk and Finance Committee on 26/08/2020, and was endorsed to submit to the Board for approval.

As the representative of the Accountable Authority of the Australian Maritime Safety Authority, I confirm that the AMSA Board has reviewed the AMSA Modern Slavery Statement for the reporting period of 1 July 2019 to 30 June 2020.

As set out in the Statement, AMSA has responded to and met the mandatory reporting criteria, and commits to continual improvement in keeping with the Modern Slavery Act 2018.